Myanmar Among Most Preferred Destinations for New Factories in ASEAN: Baker & McKenzie 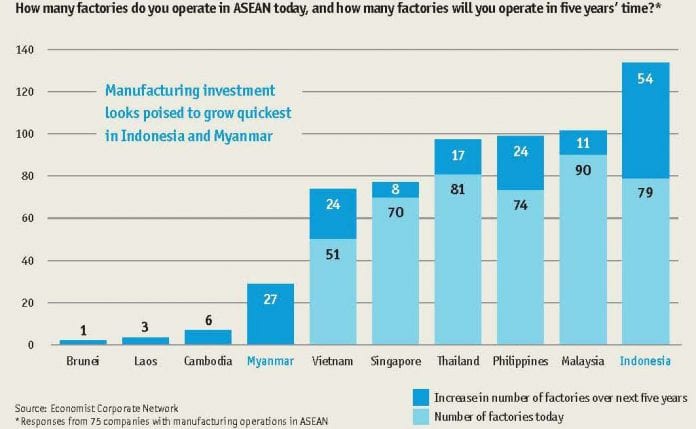 Myanmar and Indonesia came out as the most favoured destinations for new factories over the next five years, followed by the Philippines and Vietnam, a new Baker & McKenzie report revealed.

“Re-drawing the ASEAN map,” based on a survey conducted by the Economist Intelligence Unit in late 2014 on behalf of Baker & McKenzie, asked 171 business leaders at large global multinationals for their views on the formation of ASEAN Economic Community (AEC) and how it is impacting their strategy.

The report shows Myanmar and Indonesia stand out as the countries where manufacturing investment will grow quickest, with the number of factories in Myanmar to grow from currently zero to 27 by 2018 among companies surveyed.

That number in Indonesia is expected to rise by nearly 70 percent over the next five years, while Vietnam and the Philippines are also poised to gain considerable manufacturing investment.

The Baker & McKenzie report also reveals that companies are re-adjusting their manufacturing strategy, both consolidating their operations to take advantage of economies of scale as well as fragmenting their value chains to put different parts of the manufacturing process in places where local cost structures and skills are most appropriate.

There remains concern that the ASEAN single market strategy, which allows free flow of goods and labour within the region, may hurt local small and medium businesses as they lack financing and advanced technology as opposed to their superior foreign counterparts.

However, Chris Hughes, managing partner of Baker & McKenzie in Yangon, doesn’t think that’s going to be the case. “While it’s no doubt true that some companies may find it harder to adapt to a more open and regionalised environment there will be opportunities for many more firms to access bigger and new markets, skills, knowhow and capital and flourish,” he told Myanmar Business Today via email.

“The experience of increasing openness and economic engagement with overseas investors and trading partners over the last few years has already delivered many major benefits – I think the case for continuing this process is a good one,” he added.

As manufacturing investors rush into Myanmar with its recent opening up they also face major obstacles, the primary one being the complete lack of infrastructure such as road networks and electricity.

Hughes said a lot of attention is being already given to developing the infrastructure and the government has the support of many other nations and international bodies in this area and there’s a significant role for the private sector to play too.

“While there is much to do, when you see things like the development of the telecommunications system over the last 12 months and projects like the Thilawa SEZ occurring you can see what is possible, and investors gain confidence from that.”

Another critical issue that investors face in Myanmar is its antiquated and dysfunctional legal system. Hughes said a clear and robust legal framework is “fundamental” to attracting and sustaining major investments.

“The common law system that has been in place here for many years does provide a basis for working but it’s correct to say that development is needed. This is well understood by the lawmakers and real progress has been made with further important reforms under way, including in areas of real importance to investors such as banking and finance laws, IP laws, arbitration and company law.

“Practices are changing quite quickly and our clients are finding ways to develop their businesses here but for many it is still a difficult and risky proposition. Continued reform will reduce these risks, build confidence and surely lead to increased investment for the good of the country as a whole,” Hughes said.

A total of 97 percent of the surveyed companies believe the formation of the ASEAN Economic Community will be achieved. This contrasts with a 95 percent affirmation rate in a similar 2012 Baker & McKenzie report “Riding the ASEAN elephant: How business is responding to an unusual animal?”

However, ASEAN has a tricky mix of developed, emerging and least developed economies and the countries do have to tackle the disparity to make a successful integration happen.

“It means that the countries have different competitive advantages and which in turn provides greater economic depth to ASEAN as a region,” he told Myanmar Business Today via email.

“To illustrate, Cambodia and Myanmar may have cheaper labour costs and infrastructure that does not currently allow for manufacturing of high tech goods. However, they would still be able to engage in more labour intensive manufacturing activities compared to other more established manufacturing hubs like Thailand and Malaysia. Singapore may have much high costs structures but also more managerial expertise, which would make it a regional headquarter location.”

Lim said the complex mix of different economies and different stages of economic development can, with careful and considered planning, allow for businesses to site various functions in locations which make best use of the local advantages.

“It allows cross-border businesses to organise and optimise their operations very efficiently to best tap the Asian markets,” he said.

The survey showed 88 percent of the surveyed companies indicate ASEAN integration is important to their strategic planning compared with 83 percent in 2012, and 76 percent have a strategy oriented around the ASEAN.

ASEAN is home to nearly 10 percent of the world’s population with more than 600 million people and currently ranks as the world’s seventh largest economy. It is poised to become the fifth largest economy by 2018, with an expected annual average growth rate of 5.6 percent between 2013 and 2018, surpassing mature economies such as the United States, the European Union and Japan. 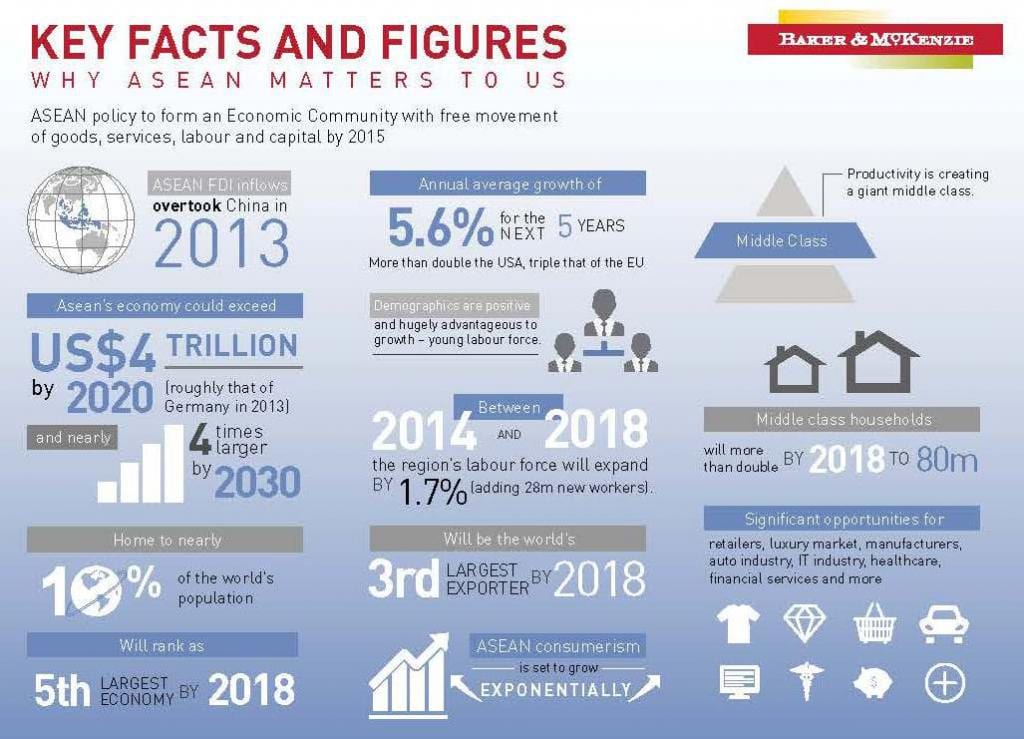