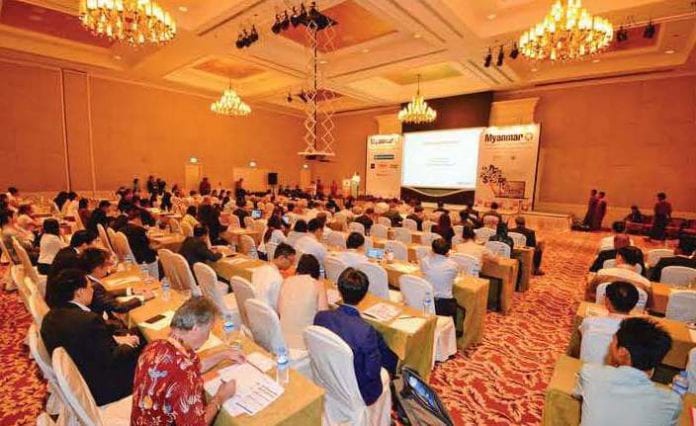 The 2nd annual Myanmar Banking and Business Development Conference, hosted by Sphere Conferences and Republic of the Union of Myanmar Federation of Chambers of Commerce and Industry, was held on July 15 – 17 in Yangon at the Sule Shangri-La Hotel.

Day one of the conference focused on the strategic aspects and the future of the banking and finance sector in Myanmar as it moves towards increased global integration, while day two emphasised the use of technology.

Dr Aung Thura, CEO of Thura Swiss, moderated a panel discussing the impact of impending foreign bank licences. During the panel discussion, Dr Sein Maung, chairman of First Private Bank, shared his surprise that the government was so quickly willing to allow foreign banks to operate in Myanmar saying that while the government has good intentions, the decision is a bit “premature.”

“Why rush? The legal base is not ready yet. Additionally, there is a big gap between capitalisation, skills and technology.

“My advice to move step-by-step in a pragmatic fashion,” ” Dr Sein Maung told the panel.

Kittiya Todhanakasem, a senior executive vice president and managing director at Krung Thai Bank, acknowledged Dr Sein Maung’s concerns and added that in an overseas market the market leader must be domestic.

She further emphasised that Thai banks will focus on financing and promoting trade of Thai corporations, which is a likely scenario for any foreign bank granted one of the coveted foreign banking licences.

Also discussed at the conference is the reality of the immense challenges Myanmar’s financial system faces in terms of the lack of skilled workers and technological improvements.

Kim Chawsu Gyi, who is responsible for the development of human resource capacity for Myanmar’s largest bank KBZ, said, “We must recruit individuals with the right skills and talent, but it is equally important for these individuals to learn soft skills such as teamwork, how to provide excellent customer service, and how to work in a professional office environment.”

Dr Sein Maung acknowledged the critical need to upgrade the technology of Myanmar’s banks. However, upgrading technology is not as easy of a task as many might think.

“Upgrading technology is very expensive. On top of that, lots of vendors come to sell software without the proper sales support and local support staff,” Dr Sein Maung said.

He confirmed the need for intensive and quick action in addressing human resources deficiencies, suggesting advancements in basic education, university and certificate courses should be emphasised.

U Set Aung, deputy governor of the Central Bank, spoke about the country’s commercial and business climate and touted Myanmar’s potential for business development and trade saying, “The Ministry of Commerce has focused on four main areas that include trade promotion, facilitation, liberalisation, and education.

“As a result, Myanmar’s trade volume significantly increased during the last three years.”

U Set Aung said Myanmar’s current prospects for growth lie in the country’s many “untapped natural and human resources, its strategic location and ability to become a major regional trading hub, and increasing south-south and global trading opportunities.”