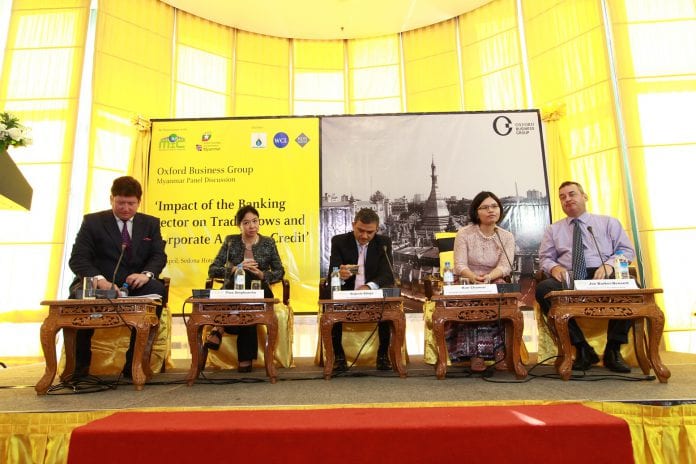 The fast-changing face of Myanmar’s banking sector was explored in detail at a roundtable organised jointly by UK-based publishing, research and consultancy firm Oxford Business Group (OBG) and the British Chamber of Commerce Myanmar (BCCM).

Over 100 industry representatives came together at the Sedona Hotel, Yangon, on April 28 to discuss what the future holds for Myanmar’s banks, as wide-ranging reforms targeting the sector gain pace.

Topical issues on the agenda included the decision to allow foreign banks to enter the market, albeit within a restricted capacity, trade flows and the planned opening of a national stock exchange. A panel of keynote speakers also looked at the challenges facing the industry, which range from skills gaps to the cost of capital.

Addressing the event, OBG’s Managing Editor for Asia Paulius Kuncinas described Myanmar’s banking sector as “the most compelling investment proposition” for international investors looking at growth potential. “Bank deposits and credit have been growing at more than 30 percent a year, even after adjusting for inflation,” he said.

He added that while much is still needed to be done before the sector could become a driver of broad economic growth, real change was already yielding results, boding well for current lenders and prospective players.

“Until recently Myanmar had the lowest credit penetration of almost any country in the world with access to finance severely limited by regulation, technology, liquidity as well as sanctions,” he said. “Now all that is changing very fast.”

The debate on what’s next for Myanmar’s banking sector also considered the important role earmarked for lenders in supporting new initiatives, such as the Thilawa special economic zone, and local businesses.

Regarding the decision by the Central Bank to allow foreign bank operators, Tony Picon, President of the British Chamber of Commerce Myanmar, said, “The awarding of foreign banking licences is a positive step in the reform of the financial system. It will facilitate investment in the country by improving access to credit for international companies and raise standards across the entire banking sector.”