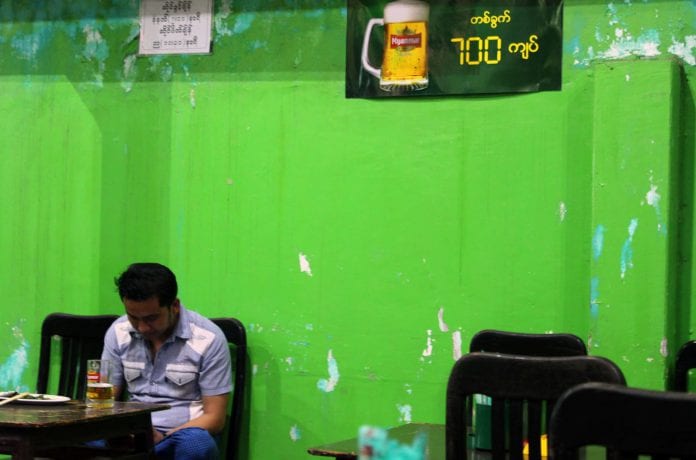 Local bars in Myanmar are called “beer stations” for a reason: Myanmar citizens in urban areas prefer beer to other types of alcohol, and tend to stick to large domestic brands.

In the beginning of June, the price of Myanmar and ABC beers were increased, causing some grumbling across the city’s bars and made Myanmar drinkers contemplate their brand loyalty.

According to Myanmar Brewery, which makes Myanmar and ABC beers, the price was increased because general costs have risen.

U Soe Kyaw Thu, deputy managing director of Myanmar Brewery, told Myanmar Business Today, “There are many reasons for the price increase. Not only general costs but other things are also involved. We cannot give details because it is confidential.”

However, in light of the rapid decline in the value of the local currency kyat the move could be seen as an offsetting measure by the beer maker.

The price of Myanmar draught beer went from K600 to K700 per glass and that of ABC went from K750 to K900. To temporarily offset these costs, Myanmar Beer launched a buy-five-get-one-free promotion until August 7.

U Aung Naing, manager of Thidar Oo restaurant in Yangon, said that after the price rose on June 1, the sale of beer has so far remained unaffected.

“There has been no difference [in sales]. We will probably find out the effect after the promotion period ends. With the promotion it cost 3,500 for six glasses of draught beer, while it was K3,600 before.”

For bottled beer, the retail prices have also increased by about K200-300 for Myanmar beer and K200 for ABC.

U Aye Kyaw, manager of Grab and Go convenience store in Thingangyun township, said that Myanmar beer sales have not declined, but some other brands, which have not seen a price hike, are posting better sales.

“In our store, the highest selling beer is now Chang beer [from Thailand]. The price is K700 for a small can and K1,000 for a large one. Myanmar beer is still selling at the same rate, but regular beer drinkers may change their preference to Chang or Andaman if the prices of these established brands keep going up.”

He said it’s too early to tell whether Myanmar beer sales will be affected but predicted that Chang beer may take one of the top spots of the Myanmar beer market.

U Min Min Htay, owner of a liquor store in Yangon, said that beer sales would not decline in cities such as Yangon and Mandalay, as there are many middle class people who have developed a brand loyalty to Myanmar beer. He said sales may decline in smaller cities, however, the current promotion may offset the increased price.

“Myanmar Beer promotions, which boost sales, usually happen two or three times a year. Normally, prizes that are given out to winners, such as pens, t-shirts, umbrellas and key chains, are not deemed valuable in rural areas and often prizes are not even available. But things will be different if the prize is more beer.”

A 2010 World Health Organization study, the most recent comprehensive study of alcohol consumption in Myanmar, found that 82 percent of alcohol consumed came in the form of beer, followed distantly by whiskey. Myanmar drinks relatively little, at only 0.7 litres per person per year, the least of any non-Muslim-majority country. It should be noted, however, that the study did not include homemade alcohol such as palm toddy, and that this study was conducted before Myanmar’s cities began their economic boom in earnest. With urban wealth increasing in the past half-decade, more beer stations have opened, especially in Yangon, Mandalay and other commercial centres.

One manager of a City Mart supermarket in Yangon said, “There’s a lot of foreign beer brands now, but Myanmar Beer and Tiger are still the top-selling at our stores. Typically, foreigners are the largest consumers of foreign beers. I don’t think sales of Myanmar beer and Tiger would go down because Myanmar people are usually attached to their brands.”