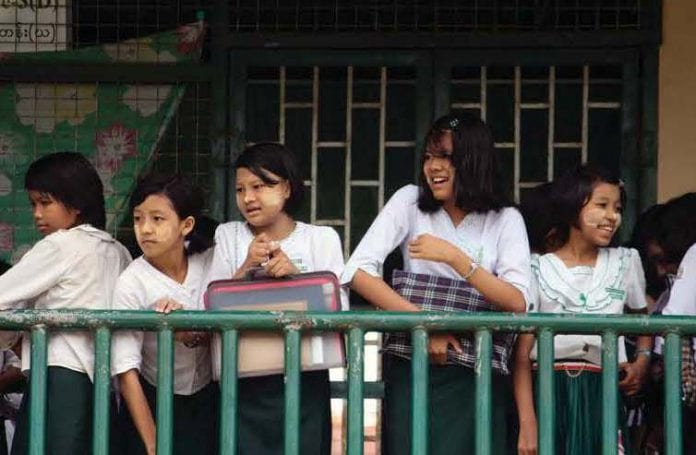 The education system in Myanmar is attracting a lot of attention in recent times, both from the state and private sectors interested to invest and lay the foundation for improvements but even more from the main stakeholders – students and teachers. No matter what course of action, it is always easier said than done to satisfy all parties involved. However, the National Education law has raised heated discussions, as it is supposed to guarantee the best education for the coming generation of Myanmar’s Human Resources.

Based on the United Kingdom, the education system is operated by the government Ministry of Education. Article 366 of the Constitution of 2008 stipulates that every citizen, in accordance with the educational policy of the Union, has the right to education. Further, they shall be given basic education which the Union prescribes by law as compulsory and citizens have the right to conduct scientific research explore science, work with creativity and write to develop the arts and conduct research freely other branches of culture.

With the constitution stating this, the government is further under pressure to pursue the much needed reforms as it has to alter the landscape and further develop the knowledge of Myanmar’s human resources for the future. Since the educational laws, which are in place, have not been amended for quite some time, Myanmar will further need to adapt their laws to manage the high demand coming from citizens for better education, as well as the demand for a skilled and well educated local workforce, coming from international companies.

A first step in this direction has been made in July when the parliament passed the National Education Bill. The bill was supposed to amend and align with current requirements for education purposes. However, instead of signing this draft into law, President U Thein Sein sent it back to parliament highlighting 25 points which needed further discussion.

Following the President’s decision for the parliament to review the draft, the Joint Bill Committee delivered a report, on September 11, suggesting MPs to accept 19 of the president’s 25 proposed changes and rejecting the others. One of the rejected points included the suggestion to make both primary and middle school free and compulsory. Instead the committee advises to go for the original version, which states that free and compulsory basic education should be implemented “step by step” throughout primary, middle and high school.

Furthermore, the committee also rejected the president’s request to remove a provision requiring the government to get parliamentary approval when forming the National Education Committee, and to place some universities under the responsibility of other government ministries, such as defence and religious affairs.

According to the Constitution, Myanmar’s president can propose amendment to bills approved by Parliament within 14 days of the legislation’s passage. Nonetheless, he is not able to prevent the bill from becoming law once a final version is resent by the legislature, and becomes law seven days after it is returned to his desk, with or without his signature. Lawmakers can, however, revisit the law once it is passed to consider amendments.

Meanwhile, during the amendments the regions Yangon, Mandalay and Monywa, were faced with demonstrations coming from student and university teacher unions refusing to accept critical points in the National Education Bill. According to the protestors, the law is unacceptable due to the remaining government control over institutions, ultimately contradicting the proposed reforms, which were to be implemented by President U Thein Sein’s administration.

As Myanmar looks to rebuild its university system, cooperation with international institutions may be one way to secure the necessary funds and other resources. Foreign investors are already exploring the primary and secondary school segments, seeking to serve wealthy local families and the expatriate community, to satisfy some of their demand and guaranteed revenue.

Overall, Myanmar has a considerable path to make in order to catch up with international and regional standards. It will not only require the National Educational Bill to guarantee the improvements in the educational system. A vast amount of the rural population still has limited or no access to internet and even in the cities the lines are not stable nor allow a fast connection. Infrastructure, transportation, teacher’s experience and an improved curriculum will further help improve the educational system.