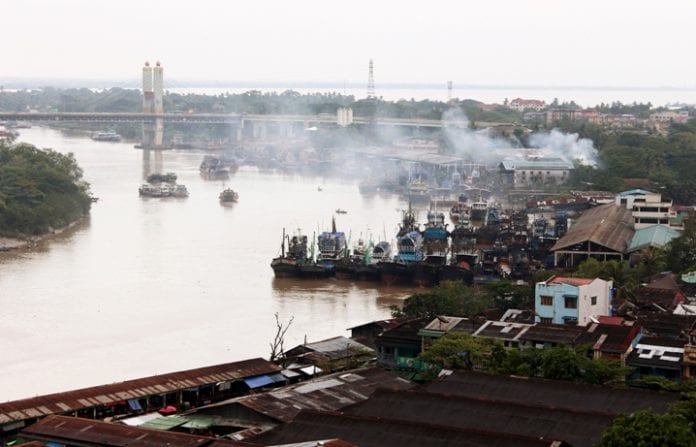 Local carrier FMI Air is on track to start scheduled operations out of Naypyitaw before the end of the year. Having secured investment approval from the Myanmar Investment Commission, the start-up, along with Yangon-based APEX Airlines, is now in the final stages of securing its Air Operator’s Certificate (AOC) from the Department of Civil Aviation (DCA), due in December. According to CAPA, using its three CRJ-200s and a Challenger 800, FMI Air plans to develop Naypyitaw into a domestic hub before branching out regionally. The carrier later also intends to acquire larger regional jets such as the EMB-190, the CRJ-900 or the Bombardier (BBA, Montréal Trudeau) C-Series.

Foreign insurers can operate in Thilawa SEZ from 2015

Deputy minister for finance, Maung Maung Thein, has said that foreign insurers can begin their operations in the Thilawa special economic zone from January 2015, local media reported. Although foreign insurers are allowed to operate in SEZs without approvals from the Myanmar Investment Commission, they must submit mandatory documents to the Insurance Business Regulatory Board, the minister said. Insurance laws in Myanmar do not permit foreign insurers to operate outside SEZs.

Myanmar Airways International has been forced to abandon plans to open up flights to Taipei Taoyuan after it failed to secure Beijing’s approval for the route. MAI’s chairman Tin Maung Htun told a summit in Naypyitaw that without government intervention, the carrier would not be able to secure lucrative Taiwanese rights, local media reported. MAI currently serves Thailand, India, China, Malaysia, South Korea and Singapore from its Yangon hub. Since the Communist Party’s ascension to power under Mao Zedong in 1949, China has viewed Taiwan as a renegade province with no right to have diplomatic relations of its own. Countries that have attempted to forge official ties with the island have often been cold-shouldered by Beijing.

India likely to import 100,000 tonnes of rice from Myanmar

India will once again rope in Myanmar to import rice to meet its public distribution system (PDS) requirement of its Northeastern states, Indian media reported. India had earlier floated bids to import rice from Myanmar for Manipur and Mizoram. Food Corporation of India (FCI) even ferried 10,000 tonnes of rice from Andhra Pradesh via Bangladesh waterways to maintain food grain stocks in Northeast following six month long mega railways blockade in Assam. “Due to high price last time import from Myanmar did not work out. However fresh attempt is being made to import the rice from Myanmar, for both Manipur and Mizoram we will import 50,000 MT each of rice,” Pinuel Basumatary, executive director of FCI for Northeast India, was quoted in the Indian media as saying.