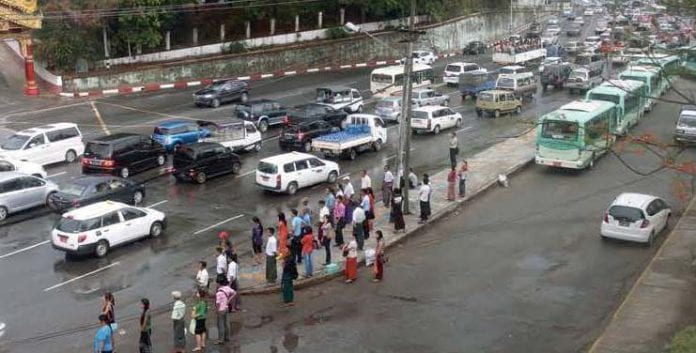 In the first nine months of the 2014-2015 fiscal year, Myanmar saw a trade deficit of almost $4 billion, official statistics show. During this period, Myanmar exported $8.6 billion worth of goods and imported $12.3 billion. The Central Statistical Organisation said that this deficit has grown from $2.7 billion in 2013-14, when the country exported $11.1 billion and exported $13.8 billion.

The Thai-Myanmar Friendship Bridge along the Myawaddy-Mae Sot border crossing has extended its hours to accommodate the growing trade volume between the two countries. The hours have been extended from 5am to 8pm, three more hours per day than previously, local media reported. This makes crossing the border more convenient for traders as well as migrant labourers who commute to and from Thailand for work.

Yangon region has invited tenders for flyovers at 8 mile, Tamwe and Kokkine junctions. The total budget for the three projects is almost $55 million, local media reported. Tamwe is the most expensive, budgeted at $22.5 million, followed by $16.5 million for 8 mile, and $15.5 million for Kokkine. The open tender will be held at the end of March.

Foreign direct investment in Myanmar is expected to reach about $7 billion for the 2014-15 fiscal year ending March 31, 70 percent more than the previous fiscal, according to government data. The government had already approved $4.4 billion in foreign investment as of November.

Telecommunications and transportation together accounted for 31 percent of foreign investment from April to November, the largest share of the total, with manufacturing being second, accounting for 23 percent.

The Indian state of Manipur is planning to import 5,000 tonnes of rice from Myanmar early next month, the state’s chief minister Okram Ibobi Singh was quoted as saying in Indian media. India moved on to import rice from Myanmar due to the ‘mega block’ of the Indian Railways caused by gauge conversion works in Assam.

Myanmar has achieved about 80 percent of its border trade target of $6 billion this fiscal year, according to the Ministry of Commerce. From April 1 to January 2 of this fiscal year, Myanmar earned more than $3 billion from exports and it spent over $1 billion on imports, bringing the total trade volume to over $4 billion. Myanmar has 15 border trade centres along the borders with China, Thailand, India and Bangladesh.

Indiana University’s Kelley School of Business is to donate more than 1,900 books to Yangon University of Economics in Myanmar as part of renovations at the IU school’s undergraduate building, AP reported. Kelley Institute for International Business program manager Jonathan Crum said many faculty members donated books from their extensive personal libraries. Those being sent to Myanmar focus on business and economics and include teaching manuals. The relationship with Yangon is part of a three-year Global Development Alliance project that also includes Hewlett-Packard and other agencies. Its goal is to help Yangon increase its teaching capabilities and help small- to medium-size businesses in Myanmar.