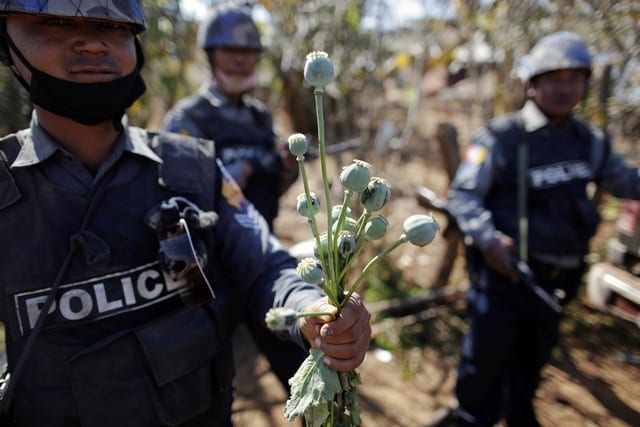 Decreased drug seizures in Myanmar have prompted concerns the plunge could point to a spike in international illicit substance trade.

Drug seizures of methamphetamine tablets from countries in the “Golden Triangle” reached 240 million last year, according to the Financial Times.

The country contributes 18 percent to the world’s total opium production despite the area’s drug output curbing at the start of the decade.

Myanmar’s opium production has grown for six consecutive years and harvest areas reached over 58,000 hectares in 2013, according to the UN Office on Drugs and Crime (UNODC).

However, UNODC representative Jeremy Douglas warned flawed drug-control policies throughout Southeast Asia could be masking the true illicit substance output of refineries in the area.

“Economic integration means there will be a lot more couriers and even more trafficking opportunities – they are going to mix their goods with legitimate trade,” Douglas was quoted as saying in Financial Times.

Official capture rates of methamphetamine pills and heroin in Myanmar dropped more than 80 percent in the first five months of 2014.

Amsterdam-Based TNI found the region’s opium production doubled in the last decade and said links between drugs, conflict and corruption in these countries remains prominent.

The plunge in Myanmar’s drug confiscations show the government’s lack of control of the border states, which make it hard for authorities to seize elicit substance entering the market.

Methamphetamine captures in the country fell to just 204,000 pills and heroin captures dropped to only 16 kilograms (KG) in the first five months of the year.

The year before methamphetamine captures were recorded at 11.9 million pills, while heroin removals made up 239KG.

TNI called for drug control policy reforms throughout Myanmar to improve the country’s management of illicit substance use and production.

The danger is that lower confiscation figures in Myanmar could lead to a wave of illicit drugs entering the market and the proliferation of international smuggling throughout the world.

The Association of SoutheastAsian Nations (ASEAN) wants to be drug free by 2015, planning to unify economic developments in the area, to help countries deal with national drug problems.

However, without the resolution of rural conflicts that profit from Myanmar’s black-market illicit productions, this goal seems unattainable in the near future.