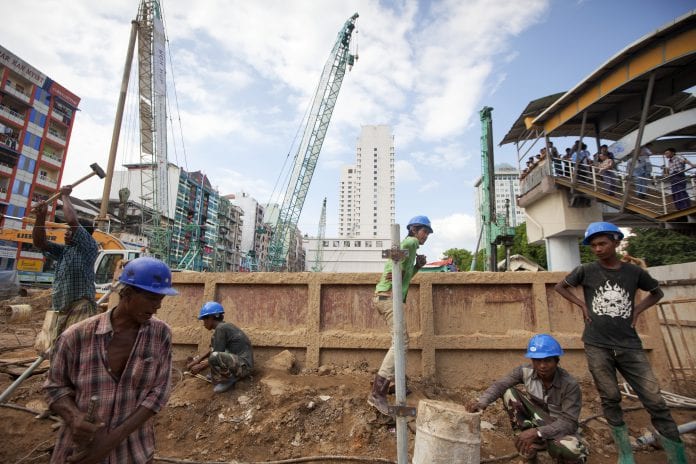 Myanmar’s economy is set to grow 6.8 percent in 2013-14 fiscal year and rise further to 6.9 percent in the medium-term, banking on rising gas production, increased trade and stronger performance in agriculture, the World Bank (WB) said in a report last week.

Although the outlook in the short to medium term remains positive, there are risks – both on the domestic as well as external fronts, the bank said.

Internal risks to the outlook include the challenge of maintaining the reform momentum, while externally, a slowdown in Chinese domestic investment and a decline in global commodity prices would hurt Myanmar, the WB said in its Myanmar Economic Monitor (MEM) report.

Soaring inflation could also dash the hopes of this impressive growth, which surpasses the average annual expansion of 5.1 percent expected in the ASEAN region. Inflation has been on the rise in recent months, reaching 7.3 percent in August, on account of increasing food and housing rental costs, the bank said.

“Inflation is currently low, but there are inflationary risks. External inflation has been contained amid lacklustre commodity prices, but accelerating growth could be inflationary considering limited supply-side factors such as rental housing. In addition, the authorities will need to develop more monetary tools to help manage money supply growth to complement the development of the financial system,” Tina said.

May Thet Zin, the World Bank’s Country Economist for Myanmar, said: “Rising inflation is always a cause for concern since it hurts the poor disproportionately, but economies do sometimes experience rising inflation, especially when in transition as is the case in Myanmar.”

However, there is no cause for alarm yet because inflation remains in single digits in Myanmar, May Thet Zin said.

“Nonetheless, it will be important for the authorities to keep a close eye on the situation so that it does not get out of hand.”

The WB said the various reforms recently undertaken by the government and planned reforms appropriately focus on improving the environment for business in the country. These include the removal of import and export licensing requirements on some 600 products, the approval of new regulations on foreign investment, the granting of licences to private insurance companies for the first time in 50 years and the enactment of the anti-corruption law, among others.

The MEM said in recent months the nominal and real effective exchange rates have been depreciating, reaching K975 to one US dollar in July, which helps to make Myanmar’s exports more competitive. Although these indicators appear to have started appreciating in August and September, which could erode Myanmar’s export competitiveness, it added.

The current account deficit increased to 4.4 percent of GDP in 2012-13, up from 2.4 percent in 2011-12, due to import liberalisation and lifting of some exchange restrictions, the WB said.

The report said the budget deficit decreased to 3.7 percent of GDP in 2012-13, from 4.6 percent in 2011-12. The 2013-14 budget provides for increased spending on social sectors, although the defence budget remains high.

Foreign direct investment in Myanmar had risen to $2.7 billion in 2012-13 from $1.9 billion in 2011-12, the WB said, in its first report since resuming operations in Myanmar in January. Most of that investment went into energy, garment, information technology and food and beverages sectors, it added.

The Myanmar Investment Commission’s (MIC) data shows an investment flow of $54 million in September, majority of them coming to manufacturing, agriculture, mining, and hotels and tourism sectors.

“By producing the Myanmar Economic Monitor, we hope to contribute towards providing data and information on recent economic and policy developments in the country as well as outlook going forward that various groups will find useful,” Khwima Nthara, WB's senior country economist for Myanmar, said.