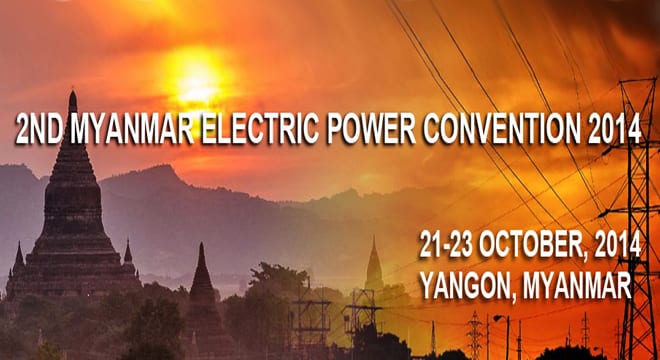 An electric power convention will be hosted by Myanmar later this month to explore ways of settling power shortage and expanding power market in the country, event organizer said Sunday.

The 2nd Myanmar Electric Power Convention (MEPC) -2014, scheduled for Oct. 21 in Yangon, will be attended by more than 250 delegates and speakers to discuss and explore opportunities in the Southeast Asian country's booming power market.

Topics to be focused during the three-day convention include current status and challenges of Myanmar's power market, investment policy and potential hydropower project, latest updates in new electricity law and the role of hydropower in Myanmar.

Electricity demand in Myanmar is increasing because of economic growth.

Meanwhile, Myanmar signed some memorandums of understanding with Thai electricity firms this month to develop electricity and with Japan's Marubeni Corporation to carry out a feasibility study for a coal-fired power plant in the country.

In January this year, the ADB provided a new loan of 60 million U.S. dollars to Myanmar for use in improving the country's power distribution network.

Myanmar has vowed to double current efforts to meet the national electrification coverage target for all households by 2030.

Effective ways are being taken to boost the current electrification effort including attracting huge investment to the sector.

Meanwhile, Myanmar's electricity access is expected to improve in the next five years as the World Bank (WB) is also seeking to invest one billion U.S. dollars in the country's  power sector including electricity generation, transmission and distribution over the period.

WB said Myanmar could increase the access to electricity to 50 percent of the population in 2020 with the funding and private sector.

According to the ministry's latest statistics, Myanmar's installed capacity now is 4,361 megawatts from all hydropower sources.

Other official figures indicate that foreign investment topped the power sector with 19.284 billion U.S. dollars as of June 2014 since late 1988, accounting for 41.28 percent of the total. Xinhua