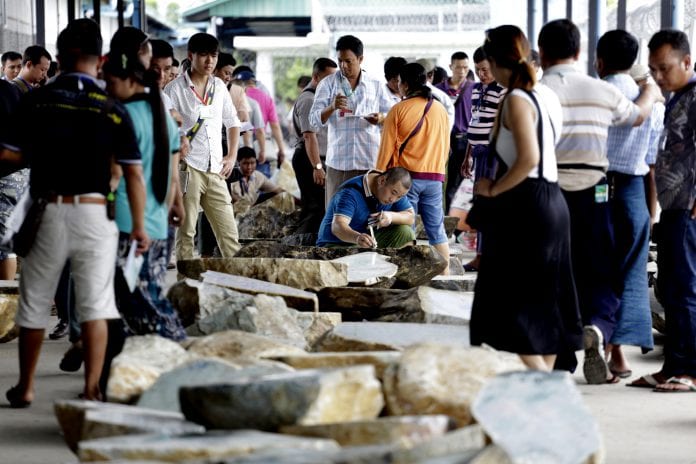 Proceeds from an annual gems emporium in Myanmar that ended this week fell 63 percent from last year to $1.26 billion, with sales suppressed by limited supply due to fighting in the mineral-rich Kachin state bordering China.

The sales fell from last year’s record $3.4 billion, with output of jade interrupted by clashes between government troops and the Kachin Independence Army, a formidable rebel militia that has refused to join a nationwide peace process until its terms are met.

“The underlying cause is the fall in jade production because of the continued fighting,” said a senior Ministry of Mines official, who declined to be identified because he was not authorised to speak to the media.

Kachin state is home to the world’s highest concentration of jade, but conflict has raged since a 17-year ceasefire broke down in 2011. The quantity and value of the jade available for sale have declined as a result.

Jade accounted for about 90 percent of this year’s sales and 80 percent of proceeds in 2014.

The precious stone is especially popular in China, where many buyers believe wearing jade jewelry brings luck, prosperity and longevity. Myanmar is also a source of some of the world’s

Myanmar’s gems emporium has been held annually since 1964 and provides a rare glimpse into its largely opaque jade trade. Experts believe about half of Myanmar’s jade is traded unofficially and ends up across the border in China without formal taxation.