Myanmar Illegal Timber Exports Worth $5.7b in 14 Years 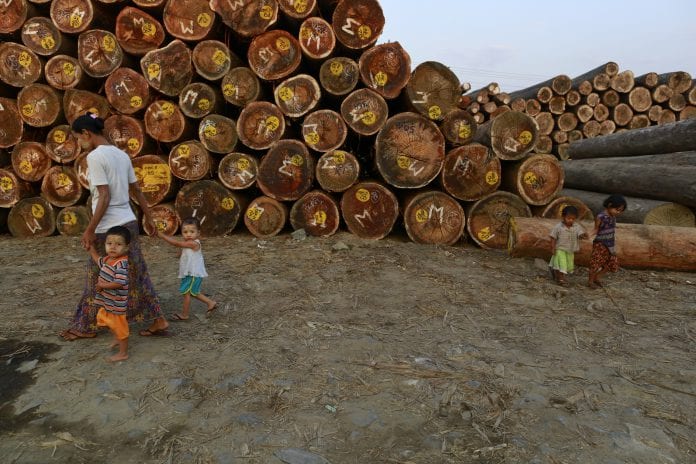 Global imports of timber from Myanmar between 2000 and 2013 were three and a half times as large as the quantity it officially exported, proof of serious ‘criminality and corruption’ in the country’s timber sector, according to a UK-based watchdog that analysed the numbers.

Official figures published earlier this month showed that Myanmar exported 6.5 million cubic metres of timber from its forests between 2000 and 2013.

In the same period, countries around the world imported 22.8 million cubic metres of logs from Myanmar.

The Environmental Investigation Agency (EIA) discovered the multibillion-dollar “black hole” by crosschecking the official figures on log harvests and timber exports – published on March 10 by Myanmar’s privately owned Eleven Media Group – with data from a UN database and the Global Trade Atlas.

While the official export figure already indicates unsustainable exploitation of the country’s forests, the reality appears to be far worse, the EIA said in a report released last week.

“The published official timber export statistics significantly under-report the true volume of wood flowing through Myanmar’s ports and across its land borders,” the EIA said in its report, noting that the official figure accounts for only 28 percent of all recorded international trade in Myanmar logs, suggesting 72 percent of log shipments were illicit.

“Such a gap is indicative of widespread criminality and corruption in Myanmar’s timber sector.”

“The Government’s official data on forestry and timber exports reveals endemic illegal logging and timber smuggling – crimes only possible through institutional corruption on a huge scale,” the EIA’s Faith Doherty said in a statement.

While the official figures do not indicate who is benefiting from the illicit timber exports, the EIA said, “The clear concern is that, regardless of wider political reforms, opaque and unaccountable forest resource allocations mean Myanmar still continues to haemorrhage valuable natural resources for the benefit of a small elite.”

Myanmar has some of Asia’s largest remaining expanses of forest, but its forest cover shrank from 58 percent of the land area in 1990 to 47 percent in 2010, according to Forestry Ministry data.

In an effort to save its remaining forests, Myanmar’s new reformist government has said it will ban log exports from April 1, choking off profits in a sector that provided crucial funding to the country’s former military rulers for decades.

The EIA said the ban in itself was not enough and called on the government to: stop favouring its cronies in forest resource allocation; investigate and prosecute companies or government officials involved in illegal logging and timber smuggling; increase transparency in the management of forest resources; and ensure civil society involvement in the planned restructuring of the Forestry Ministry.