Myanmar in The Midst of Tourism Boom 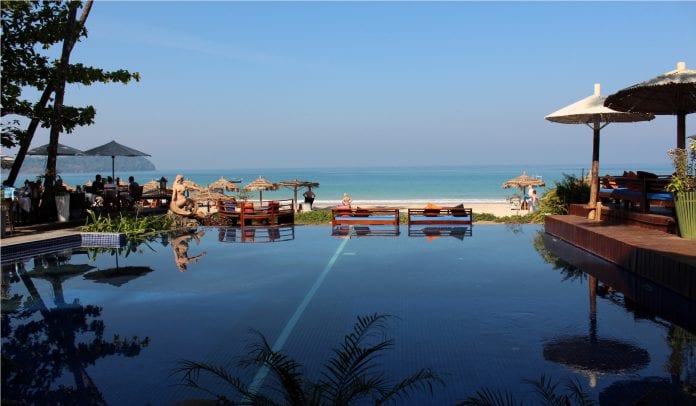 Growing international interest in Myanmar, following the easing of sanctions by the West, has led to a period of unprecedented growth in the tourism industry and has seen visitor numbers soar to 2 million last year from 300,000 in 2010, according to government figures.

Arrivals in the first six months rose 43 percent year-on-year to 1.6 million, according to official numbers from the Ministry of Hotel and Tourism, which has a full-year target for inbound visitors of 3 million. The World Travel and Tourism Council (WTTC), which analyses the sector’s performance across 184 countries, expects Myanmar to feature on its list of the top ten fastest-expanding tourism industries globally.

Last year, the direct contribution from travel and tourism to GDP stood at K849.6 billion, or 1.6 percent of GDP, according to the WTTC. The total contribution to GDP, which takes into account the wider effects from investment, the supply chain and income effect, reached K1.97 trillion             ($2.02 billion) last year, or 3.7 percent of GDP, and is forecast to rise by 9.2 percent in 2014. However, if Myanmar achieves 50 percent growth this year, as targeted, the revenue figure is likely to be a lot higher.

At the same time, fears that accelerated growth could negatively impact the quality of service and prized attractions, if left unchecked, are sparking calls from some industry players for a more cautious pace of development.

Alongside the surge in visitor numbers, Myanmar has witnessed a significant rise in investment during the past three years, with a raft of new hotels and infrastructure developments providing a boost to existing stock. The number of hotels registered in Myanmar reached 1,019 at the end of July, up from 960 recorded in March, according to the ministry.

“The huge increase in tourist arrivals has led to high occupancy rates.”

While new developments pushed up hotel stock by more than 10 percent during the first half of 2014 and took room numbers to in excess of 35,000, the industry will need to maintain momentum if it is to keep pace with the rise in tourist arrivals.

Infrastructural improvements will also have a key part to play in facilitating growth. Efforts to fill the gaps are already under way, with a new airport earmarked for Hanthawaddy, outside of Yangon, which is scheduled to open in 2016. The airport will be capable of handling 10 million international passengers annually, doubling current capacity levels across the country. Upgrades are also planned for existing facilities to support the initiative.

While the rise in visitor numbers signals good news for both the tourism industry and Myanmar’s broader economy, concerns are growing that the rapid pace of development could put a strain on resources.

“Under current circumstances, trying to attract the highest number of tourists might be counter-productive for the image of Myanmar as a travel destination.”

The country is also missing a sound regulatory environment, which may well prove crucial in providing protection for historical and natural places of interest. “Myanmar has only just opened up,” U Aung Soe Tha, chairman of Myanmar Combiz Travels, said, when speaking to OBG.

“We need to improve rules and regulations within the tourism sector to protect local business.”

While Myanmar will need to address these issues, the potential for further expansion remains huge. Western Europe, in particular, offers significant scope for growth. Tourists from the continent accounted for 17.6 percent of all arrivals in 2013, significantly fewer than the number of visitors from Asian countries, who made up 70 percent of all international arrivals, according to Myanmar tourism statistics.

Stronger promotional activities in Europe, and closer to home in Oceania, could help broaden Myanmar’s appeal, while niche attractions, including casinos, are being considered. The Ministry of Hotels and Tourism confirmed at the beginning of September that legislation enabling casinos to be established in targeted tourism zones, catering solely for foreigners, was being drafted. At present, gambling operations in Myanmar are illegal.

Despite a strong performance from the sector in 2013, Myanmar’s visitor numbers remained significantly below those of its peers, including Vietnam (7.5 million), Indonesia (8.8 million), Malaysia (25.7 million) and regional leader Thailand (26.5 million), according to figures from the World Tourism Association. However, the fast pace of growth, combined with Myanmar’s huge potential, suggests the target of welcoming 5 million arrivals in 2015 may well be achievable.

Michael Nesbitt is editorial manager for Myanmar at Oxford Business Group (OBG), and is in charge of producing sector specific research in Myanmar.