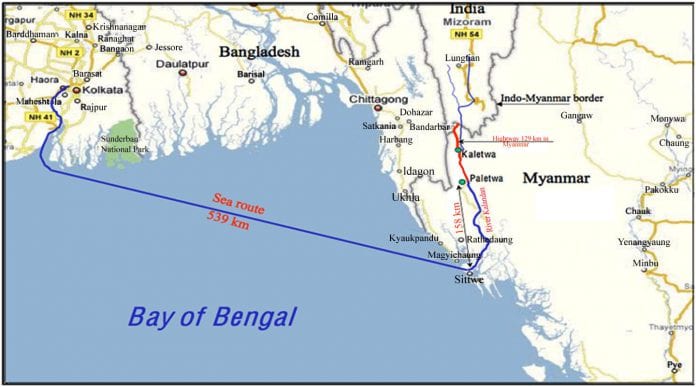 The Kaladan multi-purpose transportation project, jointly implemented by Myanmar and India, is expected to be completed by mid 2014, the project’s contractor said.

Kaladan Multi-Modal Transit Transport Project aims to connect the eastern Indian seaport of Kolkata with Sittwe port in Myanmar by sea; it will then link Sittwe to Mizoram via river and road transport. The project will reduce distance from Kolkata to Sittwe by approximately 1,328km and will reduce the need to transport good through the narrow Siliguri corridor, also known as “chicken’s neck”.

The project is being piloted and funded by the Indian Ministry of External Affairs. The preliminary feasibility studies were carried out by Rail India Technical and Economic Services (RITES). Construction work on Sittwe port and the jetty in Paletwa, as well as the dredging work, will be executed by the Inland Waterways Authority of India (IWAI), with Essar Projects Ltd, a division of the Essar Group appointed in May 2010 as the main contractor.

According to Essar Ltd, the first of the three-phase project is 70 percent complete.

The completion of waterway and highway crossing Myanmar’s Rakhine and Chin states would help support better transport and trade between the regional countries, government officials say.

Upon total completion of the project, expected to be operational by 2015, India will hand it over to Myanmar to carry out the maintenance work.

Myanmar and India signed a $214-million contract for the Kaladan project in 2008.

According to official statistics, India’s investment in Myanmar amounted to $283 million as of July in nine projects, accounting for only 0.66 percent of the total FDI, making it 10th in Myanmar’s FDI line-up.