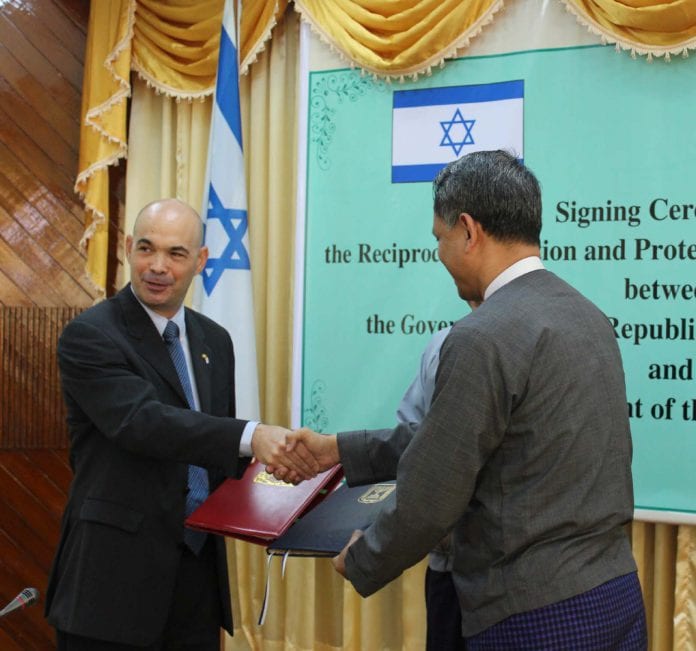 Myanmar and Israel have signed an agreement for reciprocal promotion and protection of investments in a bid to boost bilateral investment between the two countries.

The deal was signed at the Directorate of Investment and Company Administration (DICA) office in Yangon. U Aung Naing Oo, director general of DICA, signed the agreement on Myanmar’s behalf.

Myanmar has bilateral investment treaties with only a handful of countries including China, India, the Philippines, Thailand, Japan and South Korea.

“The implementation of the agreement will encourage  more  Israeli businesspeople and  companies to  invest  in  Myanmar, expand  the  volume of  the  bilateral trade and contribute in the development of its business sector and national economy,” Hagay M Behar, ambassador of Israel to Myanmar, said.

“The agreement entails that the Israeli businesses investing in Myanmar will be protected in accordance with the foreign investment regulations. Investments from Israel are set to come in, especially in the agricultural sector,” said Daw Tin Aye Han, director of Myanmar Investment Commission.

The deal was Behar’s last official act as he ended his position as the 21st Israeli Ambassador to Myanmar last week. He said his Myanmar counterparts moved swiftly and efficiently with the negotiation, which characterises the “long lasting and unique relations” between the two nations.