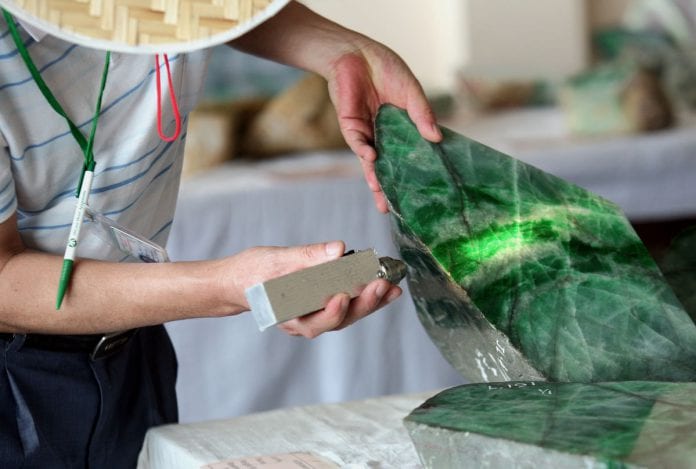 Foreign and local jade buyers will have to put down a deposit of 10 percent of the value of gems to be purchased starting from next year, U Kyaw Htay, first secretary of Myanmar Gems Entrepreneurs Association, said.

“We decided to take such measure because in the past many buyers decided to buy jades and changed their minds later. So now buyers have to put down a 10 percent deposit first and the rest can be settled later,” U Kyaw Htay told Myanmar Business Today.

The measure will come into effect at the 52nd Myanma Gems Emporium, to be held next year, and the announcement regarding this will be made at this year’s edition of the emporium, which will be held from June 24-July 6, he added.

Local and foreign buyers will have to put down 10 percent of the value of purchased items as deposit at a Myanma Gems Trading Bank account. Jade sales are settled in foreign currencies such as Euro or US dollars, so foreign currency accounts will be opened to facilitate this measure, U Kyaw Htay said.

He hoped that this year’s emporium will attract a lot of foreign buyers. A total of 7,500 jade lots will be showcased this year – 2,100 of which are from the government.

Local gems dealer Ko Thein Han said, “The idea of taking a deposit is a good one, and it’s also good to fix it at 10 percent.”

This year’s show will allow exhibiting finished jade products for the first time and lowest price for that has been set at €1,000 ($1,365).

Last year’s exhibition fetched $2.4 billion, a record sale of gems and jade over the past few years. The sale picked up from the 2012 annual event when sales plunged to $702.66 million.

Myanmar started to hold gem shows in 1964 selling gems annually. Since introducing the mid-year show in 1992 and the special event in 2004, the gem emporium now takes place three times a year.

The latest official figures show that in 2011-12, Myanmar yielded 43,185 tonnes of jade and 13.398 million carats of gems which include ruby, sapphire, spinel and peridot, as well as 1,091 kilograms of pearl.