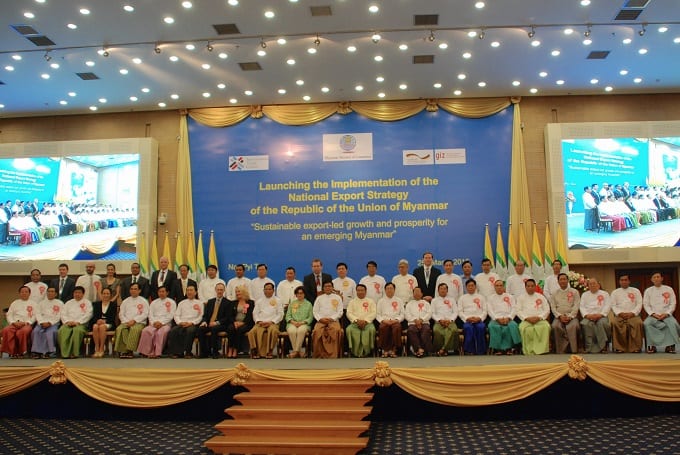 The NES is a five-year roadmap of the needs and priorities for Myanmar’s sustainable development through trade. Action plans in the NES include interventions to boost the competitiveness of small and medium-sized enterprises (SMEs), to longer-term policy and legislative changes, all geared at sustainable export-led growth.

The strategy was spearheaded by the Ministry of Commerce, with the technical assistance of International Trade Centre (ITC) and financial support from Germany’s Federal Ministry for Economic Cooperation and Development (BMZ) and implementation support of the German Agency for International Cooperation (GIZ).

“The NES resulted from extensive public and private engagement to contribute to the development of the whole country,” said Vice President U Nyan Tun.

“The priority sectors identified in the strategy have been selected as the most effective export sectors to deliver socioeconomic development to the people of Myanmar. … I am convinced that the implementation of the NES will effectively support the main objectives of the nation, such as poverty alleviation, rural development and broad-based income growth, and will successfully lead Myanmar to sustainable growth and prosperity.”

The NES seeks to shift Myanmar’s trade patterns as the country’s exports have become concentrated on a handful of products, mostly unprocessed natural resources, and export destinations remain limited.

To extend trade to new products and markets, the NES is expected to serve as a roadmap to increase production and value addition in the following priority sectors: beans, pulses and oilseeds, fisheries, forestry products, textiles and garments, rice, rubber; and tourism. The NES also recommends targeted investments for each export sector.

For the private sector to fully participate in this transformation, the NES tackles constraints in the business environment through access to finance, trade information and promotion, trade facilitation and logistics, as well as quality management.

ITC, the joint agency of the World Trade Organization and the United Nations, said as the national roadmap for trade and competitiveness, the NES will pave the way for new development ventures. The Ministry of Commerce is liaising with numerous partners to collaborate on the development of projects related to the activities outlined in the NES.

ITC Executive Director Arancha González said, “Successful implementation of the activities outlined in the National Export Strategy will support the development of key markets, allowing enterprises and workers in Myanmar to benefit from greater participation in the global economy.”

She added: “A crucial factor is the development of a dynamic private sector with a particular focus on SMEs. At the same time, the NES rightly calls for an improved quality infrastructure and lower trade-related transaction costs.”

In 2014, as part of its programmatic approach, ITC began implementation of the NES with an inclusive tourism project in Kayah State in eastern Myanmar. Financed by the Netherlands through the Centre for the Promotion of Imports from developing countries (CBI), the project will integrate local producers and service providers into tourism value chains, while also helping inbound tour operators in Myanmar to develop inclusive tourism.

Another project, funded by the Standards and Trade Development Facility of the World Trade Organization, will improve the competitiveness of Myanmar’s oilseeds value chain by improving food safety and compliance with quality standards, which are prerequisites to entering foreign markets. Myanmar is one of the world’s largest producers of oilseeds.