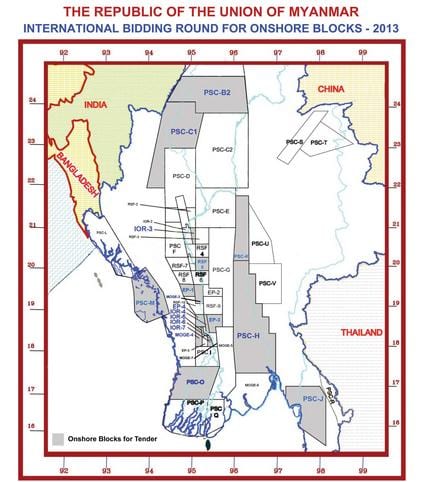 Myanmar opened up a major portion of its onshore oil blocks for bids last week, a move likely to see a surge in interest from Western firms after the removal of sanctions against the country.

A notice published in the state-run English-language New Light of Myanmar newspaper said 18 blocks were up for grabs in deals that would see firms partner with state energy companies, including the controversial Myanma Oil and Gas Enterprise (MOGE).

According to the MOGE website, the sites available for exploration would represent more than a third of the country's around 50 onshore blocks.

The tender would be the first since 2011, when most bidders were from Asian countries as tough sanctions and concerns about MOGE's governance and links to the former junta deterred wider participation.

Firms will be able to bid for up to three blocks each, according to the notice.

Foreign investors have been eagerly eyeing resource-rich Myanmar since Western sanctions began to be dismantled in response to reforms by a quasi-civilian government that took power in 2011, ending decades of junta rule.

He told AFP the country was an “exciting” destination for oil firms because sanctions meant there has been very limited investment in oil exploration.

“Although rapid economic reforms since 2011 have made Myanmar a gold-rush economy, it also remains a new-frontier market with a high level of country risk for foreign investors,” he said, citing political risk and corruption.

Myanmar's oil and gas industry accounts for some 34 percent of total exports, according to IHS. Biswas said the sector “will play a key role in the nation's further economic development, generating new exports and fiscal revenue.”