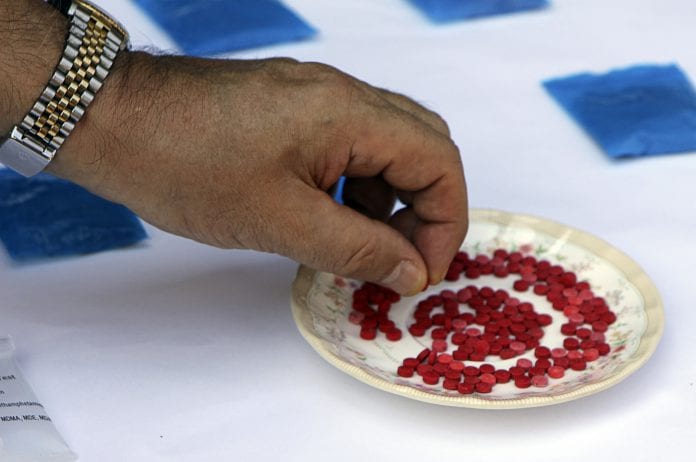 Myanmar remains the primary source of methamphetamine pills in East and Southeast Asia, according to a report by the UN Office of Drugs and Crime (UNODC), as seizures of pills in the region reached record numbers in 2012.

The report, titled ‘Patterns and Trends of Amphetamine-Type Stimulants (ATS) and Other Drugs – Challenges for Asia and the Pacific 2013,’ says that the use of the drug has increased in eight of the 15 countries surveyed, including Myanmar, Cambodia and Japan and that methamphetamine is now the first and second most popular drug in 13 of the countries.

According to the report, Myanmar continues to be a major source of Southeast Asia’s crystal meth, as well as opium and heroin.

After Afghanistan, Myanmar’s is the world’s second largest producer of opium, accounting for about 10 percent of global production, with the majority in Myanmar being produced in Shan state, where poppy farmers are often drawn to the financial incentives of producing the opium needed for the drug.

Located close to the ‘Golden Triangle’ region, which borders Laos, Thailand and Myanmar, Shan state has long been a large source for drugs production, due to ethnic unrest in the region, which allows drug mules to peddle their products over the porous border.

Myanmar’s neighbours are its main market, with an estimated 90 percent of crystal meth seized in Thailand last year, coming from Myanmar, the report said.

As well as Myanmar, other countries where large quantities of ATS are produced include China, Malaysia, Indonesia, Cambodia as well as Australia and New Zealand.

Of the 227 million methamphetamine pills seized in 2012, 99 percent came from China (102 million), Thailand (95 million), Myanmar (18 million) and Laos (10 million), while there was a significant increase in seizure in Malaysia and Vietnam.

The report also highlighted a resurgence of the ecstasy market in the region, with ecstasy pill seizures reaching 5.4 million, almost tripling from 1.6 million pills seized in 2011.

The report says that drug trafficking in the region is mostly controlled by regional syndicates, but that groups from Africa and Iran were also continuing to expand their trafficking operations within East and Southeast Asia, while Indian and South Asian networks are playing an increasing role in smuggling necessary chemicals and pharmaceutical drugs into the region, with the vast majority coming across the India-Myanmar border.

“The worsening illicit drug situation has a domino effect on governance, greatly taxing criminal justice and health systems and threatening human securities through Asia and the Pacific,” said Jeremy Douglas, UNODC Regional Representative for Southeast Asia and the Pacific.

“While regional integration positively facilitates the free flow of goods, services, investment, capital and labour, it is being exploited by transnational organised crime to expand its activities in our region.”