Myanmar Moves to Bring Finances Out of The Shadows 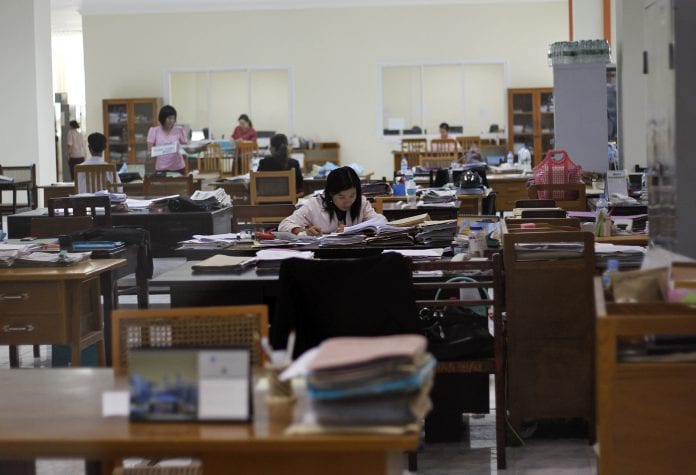 With wide-ranging reforms set to improve the transparency of Myanmar’s public finances, the government is expected to launch a drive aimed at bringing businesses into the mainstream economy.

The decision to open up Myanmar’s markets to the outside world, following the change of government in 2011, brought with it a first-time opportunity for both nationals and global observers, including international financial institutions (IFIs), to view the state’s allocation of resources.

The move has garnered significant interest among investors, although Myanmar faces a gargantuan task in putting its public finances in order. Among its challenges, the government will be looking to draw more enterprises into the official economy, allocate payments efficiently and transparently, and boost tax collection.

According to conservative think tank the Heritage Foundation, Myanmar has one of the lowest tax-to-GDP ratios in the world, at around 5 percent, far below its ASEAN peers, where this figure averages 15 percent.

However, assessing the extent of taxation is complicated by the fact that Myanmar’s GDP is also known to be vastly understated.

Experts agree that with business dealings largely cash-based, unbanked and untaxed, the size of the economy can never be more than an educated guess. Local business representatives put Myanmar’s shadow economy at between 30 and 100 percent of official GDP figures, providing the administration with huge potential for boosting tax revenues.

The government will be hoping that as Myanmar’s commercial environment increases in transparency, more local businesses will be encouraged to come out of the shadows and participate in the country’s development, buoyed by rising foreign investment and international trade.

A recent World Bank study on Myanmar’s public finance management highlighted many building blocks that the government could use to improve accountability and boost its fiscal position.

Aware of the challenges that Myanmar’s government faces, the institution put an emphasis on making expenditures more accountable and allocating resources efficiently, rather than increasing revenue or stepping up enforcement.

While the state’s revenues are generally in line with the government’s projections, spending is often more difficult to track. According to the World Bank, the difference between actual and budgeted expenditures has increased in recent years, rising from 8.7 percent of approved spending in 2008-09 to 20.2 percent in 2010-11.

The World Bank also pointed to hefty revisions and adjustments in budgets, alongside a lack of arrears monitoring. Other concerns included extensive use of the “other accounts” section, which in 2011-12 registered receipts of K2.54 trillion ($2.54 billion), or 44 percent of total budgeted revenue, and expenditures of 2.26 trillion ($2.26 billion), representing 28 percent of total budgeted spending.

Winning over the voters

The new regime has moved to target problem areas at a rapid rate, in the spirit of the equally fast-paced broader reform process.

Recent television debates on the allocation of finances, together with the publication of a budget law in local papers, are proving instrumental in convincing Myanmar’s citizens that government expenditure is being negotiated more openly. Accountability is also a key topic of discussion, particularly in light of the elections that the country is set to hold in 2015.

IFIs, rival political parties, scholars and citizens are among the broad range of groups calling for transparency to be given a priority by a Myanmar government.

However, since the government has only one fiscal year under its belt after deciding to open up the country to watchdogs and voters, the process is widely expected to be a gradual one.

With information and historical records still coming to light, most international institutions, including the World Bank, recognise that a cooperative approach will yield the best results. When local parties begin campaigning for the elections, however, the approach and tone could change.