Myanmar Must be Aware of China’s Manipulation 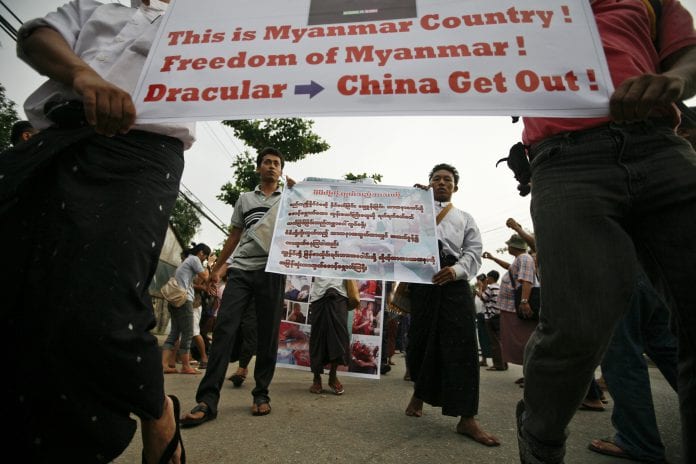 Myanmar President said that his country has kept on political and economic reforms especially targeting on poverty alleviation. However, Myanmar government has been making perplexity toward the international community with the degree of changes.

As Western democracies have been lifting sanctions on Myanmar, questions arise among several political actors for the rapid change of course. Although a huge number of reasons contribute to reforms, some Myanmar watchers see that the dependence on China is a noteworthy topic.

In the wake of the postponement of the controversial Myitsone dam in Myanmar, China Power Investment (CPI) Corp President Lu Qizhou said in September 2011 the project’s suspension by the Myanmar government was a shock. It will lead to a series of legal issues, he said. The suspension of the dam project seems to be the latest sign of strained relations between the two countries.

Lu Qizhou, in an interview with the state-run Xinhua news agency in October 2011, said he learned of the suspension of the $3.6 billion Myitsone dam project through the media and was completely surprised. It is unclear how the CPI may possibly force legal process on the issue. The company did not clarify which legal avenues it will explore. However, the Myanmar government’s spokespersons didn’t give any comment so far.

The relationship between China and Myanmar is under the spotlight in last September with a visit to China by President U Thein Sein, who abandoned his military uniform to become the country’s first civilian president within five decades. During a meeting with President U Thein Sein on September 3 in Nanning, capital of south China’s Guangxi Zhuang Autonomous Region, Chinese Premier Li Keqiang suggested that both countries should build on political mutual trust and strengthen cooperation to bring greater benefits to local people, as reported by Xinhua News.

U Thein Sein said that his country is willing to improve strategic communication and raise cooperation in an attempt to approve development of bilateral ties and ASEAN-China relations.

For the resumption of the Myitsone hydropower project, promoters said that the high-profile exchange has rekindled their hopes, calling on both sides to establish an inter-governmental mechanism to facilitate resumption of the project as early as possible. Jin Honggen, an economic and commercial counsellor at the Chinese Embassy in Myanmar, said that the Myitsone hydropower station is a win-win project for both sides.

Myanmar’s Kachin state is rich with a variety of natural resources that draw neighbouring China’s interest. Not only is China keen to develop the trade and investment sector, the geopolitical frontier of the Kachin state is also meaningful for China. The Myitsone Dam project, financed by China Power Investment Corp, has been suspended due to protests by local people with supporters throughout the nation.

The planned dam location is at the junction of May-Kha and May-Likha, 27 miles upstream from Myitkyina. This venture will generate 3,600 MW of electricity. The dam is being constructed by Asia World Company, owned by son of former drug lord Lo Hsing Han, and China’s state-owned CPI. Security for the project is being provided by the Myanmar military.

Thousands of Chinese migrant labourers were brought in to build the dam. The development, should it go ahead, will inundate the famous Myitsone confluence at the starting place of the Irrawaddy River in Kachin State and permanently displace 15,000 people.

The dam, the first in a series of seven on the Irrawaddy and its tributaries, will have disruptive impacts on millions living downstream. Water will be stored and released depending on power demands in China, causing unpredictable water shortages and surges. This, in addition to decreased fish populations and blockage of rich sediments, will affect countless farmers, fisher-folk and boat-operators along the river.

The previous junta, together with the Chinese government, did not take into consideration the desire of the native Kachin people, who were never consulted about the dam prior of the projects in their neighbourhood. The CPI made the dam contract with the previous junta’s Electric Power Ministry in May 2007, without respecting the opinion of the people who live in the area.

The development has been ostracised throughout the country because it will involve a reservoir the size of Singapore, and will seriously damage the environmental and social surroundings. It is being built and invested in by Chinese companies and over 90 percent of its electricity will go to China. Even the Kachin people have little chance of enjoying the electricity generated by the dam in their locality.

In response, Asian Superpower was guaranteed of access to Myanmar’s abundant natural resources such as gold, gemstones, timber and agricultural products as well as involvement in several hydropower dam-projects. Moreover, China also gains using Myanmar as a gateway to the Indian Ocean and is completing the construction of oil and natural gas twin-pipeline project includes a 1,100-kilometer pipeline from Kyaukryu port on the west coast of Myanmar to Kunming, capital of Yunnan Province, a large-scale crude oil unloading wharf and a terminal at Kyaukryu port, with nearby oil storage and transportation facilities.

According to Chinese media, CPI representatives have repeatedly met with Burmese officials to lift the dam suspension and CPI visited relocated villagers to assure them that the dam will be advantageous. CPI is the project implementer for a series of seven dams on the Irrawaddy and its tributaries in war-torn Kachin State to sell electricity to China, Kachin Development Networking Group said.

It looks as if China has been trying to keep Myanmar within its influential sphere since the ASEAN-member country has also been seeking to join in the US-led Cobra Gold military exercise in the Pacific. Myanmar expressed its interest in joining the Cobra Gold annual military exercises in Southeast Asia.

China may be concerned about military relations between Myanmar and the US. Coincidentally, China relations with some Southeast Asia countries are at risk. China has also border disputes with the Philippines and Vietnam.

During the previous military regime, the ruling generals were tarnished by mounting human rights abuses. So, they made bargains for their security by allowing ravenous China into the country’s natural resources domain via badly unbalanced Memorandum of Understanding agreements. Actually, the generals scandalously exploit the country’s resources selling to China for their safety and continuation of power. They were safeguarded from domestic and international condemnations by China’s veto power in the UN Security Council.

According to an article – Burma’s Thein Sein Visits Washington by Jay Newton-Small – on 20 May, 2013 published in the ‘TIME’: “ The reopening of Burma to the Western world is a blow to Chinese influence in Southeast Asia. For much of the past 20 years China was one of the big investors in Burma. But decades of what local authorities came to view as abuse by Chinese companies exploiting Burma’s bountiful natural resources helped create an opening for the Obama Administration, says Ken Lieberthal, a China expert at the Brookings Institution. Chinese leaders are ‘increasingly concerned with the resentment they’re experiencing in Burma.’”

Some observers believe worries over the degree of Beijing’s power helped force the Myanmar government throwing away the Chinese manipulation and giving up to a quasi-civilian regime in 2011. The Myitsone dam affair suggests the Southeast Asian nation is eager to be free from China’s influence as it seeks greater favour among Western democracies. President Thein Sein must be aware of his good decision to postpone the massive dam has been strongly supported by the majority of citizens.

More to the point, the government and its people must be vigilant against the neo-colonialism of China which exploits the political disunity in Myanmar. The previous military junta appeased China, offering country’s precious natural resources cheaply in order to get a veto-shield for its dictatorship.

Zin Linn is a freelance writer and journalist from Yangon. He has been writing political analysis of Myanmar for more than a decade. At present, he is an editorial quality consultant at Burma News International (BNI) based in Chiang Mia, Thailand.