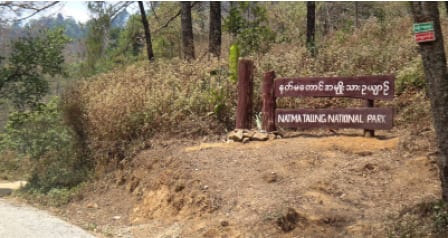 Rising from the surrounding Chin Hills, Nat Ma Taung National Park is renowned for its extreme elevation gradient and great beauty. Serving as a refuge during the last glacial period, the site is an alpine “sky island” with a diversity of Himalayan flora and is home to over 800 plant species, including a rich variety of orchids, and several endemic bird species.

Indawgyi Lake is one of the largest lakes in Southeast Asia. It provides habitat for 10 globally threatened bird species and is of outstanding value for conservation of migrating waterbirds. The lake also contains important endemic fish and turtle species, such as the Burmese Peacock Turtle.

The recommendations emerged from the National Consultation Meeting organised by the Ministry of Environmental Conservation and Forestry and UNESCO last month in the country’s capital Nay Pyi Taw.

Dr Nyi Nyi Kyaw, director-general of the Forestry Department, said: “Myanmar still does not have any natural World Heritage sites, yet there are several sites with high potential. The designation of World Heritage would provide opportunities for practicing the effective protection and management of these irreplaceable sites.”

Participants from government ministries, national and international NGOs and universities recommended the two sites from among the seven that were recently proposed for Myanmar’s World Heritage Tentative List. The Tentative List is the inventory of sites that Myanmar considers has potential for future World Heritage listing.

A signatory to the World Heritage Convention since 1994, Myanmar does not yet have any sites inscribed on the List.

Dr Tim Curtis, chief of UNESCO Bangkok’s Culture Unit, said: “World Heritage provides a framework for the highest level of international commitment to the protection of sites which are considered of Outstanding Universal Value. Myanmar is now taking an important step forward in protecting its natural heritage in accordance with World Heritage standards.”

The consultation meeting was conducted under the UNESCO project “Safeguarding Natural Heritage in Myanmar within the World Heritage Framework”, which is being supported by the Government of Norway through the Nordic World Heritage Foundation.

The other five sites which have been proposed as having potential for future natural World Heritage inscription are: the Northern Forest Mountain Complex containing the snow-capped Mt Hkakaborazi, which rises to 5,880 metre; the Myeik Archipelago containing over 800 islands surrounded by extensive coral reefs in the Andaman Sea; the Hukaung Valley Wildlife Sanctuary, an important habitat for globally threatened wildlife, notably tigers and Asian elephants; the Tanintharyi Forest Corridor, the largest remaining lowland evergreen forest in mainland Southeast Asia; and the Ayeyawaddy River Corridor, home to the threatened freshwater Irrawaddy Dolphin.