Myanmar One of The Top Countries to Invest in 2014, But Risks Remain 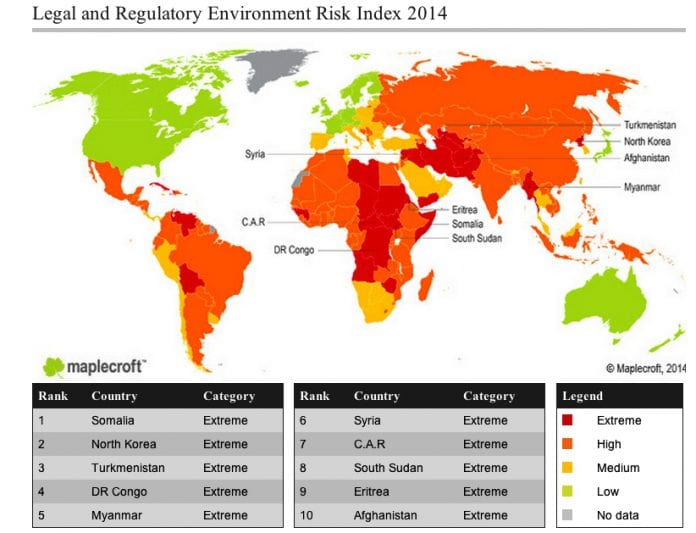 Myanmar made the greatest improvements to its business environment for 2014 more than any other country, UK-based global risk and strategic consulting firm Maplecroft said in a report.

In its fifth annual Legal and Regulatory Environment Risk Atlas (LRERA), Maplecroft said Myanmar has made strides through reforms to address issues such as corruption, rule of law, the regulatory framework, respect for property rights and corporate governance.

The LRERA includes 21 risk indices developed to enable companies and investors to monitor the ease of undertaking business in 173 countries.

“In the last year the only country to significantly improve its risk profile is Myanmar, which moved up more than 10 percent in the LRERA scoring system,” said the report.

Maplecroft said the government’s resolve to improve the business environment has resulted in a number of important steps been taken to enhance investor protection, including the implementation of a new foreign investment rules in March 2013, which provides clarity around essential issues such as foreign ownership limits and land leasing rules.

Myanmar’s commitment has resulted in a steady climb in the ranking from worst position at the bottom of the ranking in 2012, to 3rd from bottom in 2013 and 5th in 2014.

Despite the modest shift in ranking, reforms have already resulted in significant improvements for business, and Maplecroft forecasts that if Myanmar sustains its current trajectory it may move out of the “extreme risk” category in less than three years.

However, Maplecroft sounded caution notwithstanding the positive medium-term outlook.

“Current levels of corruption, lack of rule of law and interference in business by a wide range of powerful and vested interests, including the military, continue to create a very uneven playing field for foreign investors,” it said.

Myanmar’s commitment to upholding rule of law continues to be tested. In August 2013, a dispute arose over the ownership of Myanmar Brewery Ltd, between the military controlled Myanmar Economic Holdings and Singapore firm Fraser & Neave. Should arbitration best practice not be followed, investor confidence in Myanmar is likely to be undermined, Maplecroft said.

“The country’s current lack of effective institutions of governance still raises serious concerns over regulatory enforcement, and it remains a challenging place to do business,” Laws said.

Legal and regulatory risks impacting property rights are of particular concern in resource-rich countries. Despite softening commodity prices over the past year, societal unrest and poor economic conditions can act as risk multipliers in relation to the respect of private property rights, the firm said.

“Company assets, especially those in the mining and oil and gas sectors, can become subject to nationalisation and expropriation, as governments seek to offset societal unrest or strengthen their position through the use of resource nationalism, as witnessed in Venezuela and Argentina in 2012 and 2013,” the report said.

As well as presenting major risks to business, poor governance and corruption can also undermine the development potential provided by an abundance of natural resources, Maplecroft added.

The legal and regulatory environments of the mineral and hydrocarbon rich growth markets of Nigeria (33rd), Russia (34th), Indonesia (70th), and the Philippines (77th), meanwhile, are categorised as posing a “high risk” to investors.

Senegal, Guatemala, Mozambique and Rwanda, meanwhile, are among the countries with best performance over the last five years, according to the report.

Legal mechanisms and regulatory structures are typically well entrenched features of a country that are not subject to fast change without significant political will and reform. However, over the last five years the LRERA reveals that a number of countries have made steady improvements.

These decreases in risk were primarily due to substantive efforts to improve the legal and regulatory environment and encourage foreign investment which includes moves to strengthen corporate governance, to reduce regulatory hurdles, to combat corruption and to improve rule of law, Maplecroft said.

Outside of these markets, the LRERA reveals a number of countries that have experienced an increase in risk, due to factors such as conflict, the rise of authoritarian governance or the introduction of destabilising government policy changes. These include: Syria, which dropped to 6th from 29th in 2010, Guinea (15th from 42nd), Bangladesh (29th from 52nd), Egypt (32nd from 73rd), Mali (39th from 83rd), Argentina (59th from 78th) and Bahrain (122nd from 133rd).

Rule of law, including judicial independence and effectiveness, is a fundamental ingredient in the fight against corruption and remains weak in a large number of countries, particularly in Asia, Africa and the Middle East, Maplecroft said.

This lack of rule of law continues to contribute to regime instability in those countries that witnessed regime change during the Arab Awakening of 2011, as well as many other countries with potential for societally forced regime change, including Turkmenistan (3rd), Cambodia (28th) and Viet Nam (53rd).

Since 2009 some of the biggest increases in legal and regulatory risk have been experienced by foreign investors in Argentina, Bahrain, Bangladesh and Egypt.

Maplecroft states that the business environment in these countries is being curtailed by factors such as a lack of respect for the rule of law and property rights, weak investor protection, increasing regulatory burdens and poor governance resulting from instability.