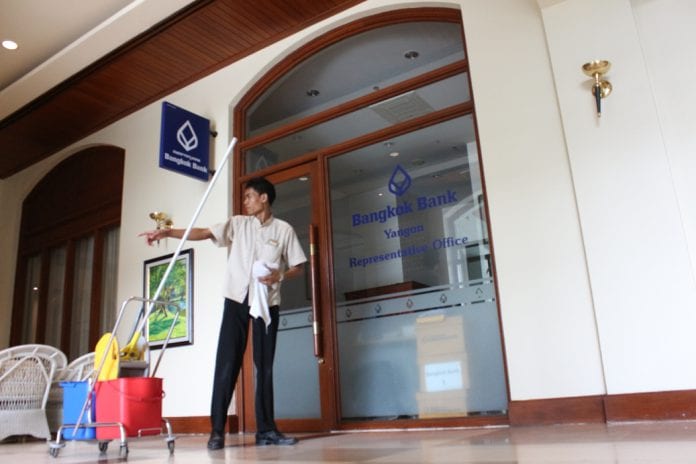 Foreign banks are about to make a return to Myanmar after an absence of more than 50 years, in a move that is intended to support foreign direct investment (FDI) but may also pressure domestic lenders to raise their game.

At the beginning of October, Myanmar announced it was granting preliminary approval for nine foreign banks to commence limited operations starting 2015, marking a resumption of such services for the first time since the 1962 coup, albeit in a more restricted capacity. All nine were chosen from a pool of more than 40 lenders with representative offices in the country, more than half of which opened within the past three years, an indication of the enthusiasm foreign banks have for the Myanmar market.

The banks, all from the Asia-Pacific region, have been given 12 months to launch.  However, as laid out, the scope for their business will be limited and therefore, initially they will not be a direct threat to the business interests of Myanmar’s existing 26 domestic lenders.

Under the terms set out in October, the new entrants into the market will only be able to offer wholesale banking products and services to foreign firms and local banks. They will be allowed to provide kyat-denominated loans to domestic companies only through a partnership arrangement with a Myanmar registered lender, with interest rates set by the central bank.

While they will be authorized to accept deposits and make loans in US dollars and the euro to foreign businesses, the banks will not be able to engage in normal retail banking, a restriction seen as limiting their possible impact on monetary movements.

The focus of foreign banking operations towards business activity – especially that of overseas firms operating in Myanmar – is seen as a measure to further promote foreign investment in the country by facilitating financial services for those companies and by creating a banking environment with an international basis.

While the opening up of the banking sector has generally been welcomed, there are some concerns indigenous lenders could be swamped by their better resourced and more developed competitors from overseas if they are granted full access to the market too quickly. Joe Barker-Bennett, a consultant with the privately owned Tun Foundation Bank, said the early entry of foreign lenders into the marketplace could overwhelm local banks if they are not given time to prepare for increased levels of competition.

“If you allow foreign banks in too early it will cripple local banks,” he told OBG. “It will be like fighting Muhammad Ali in his prime with your arms tied behind your back.”

However, though there will likely be domestic banks that suffer due to the open market approach favoured by the government and central bank, Barker-Bennett said the increased competition could also prompt some Myanmar banks to step up their game.

Opportunities for expansion lie ahead for local banks in terms of the client base and the broader economy, which the International Monetary Fund (IMF) forecast in October would expand by 8.5% in 2015. Retail banking also offers opportunities, with data from the International Finance Corporation (IFC), an arm of the World Bank, showing only some 20% of Myanmar’s citizens have access to formal financial services.

Any growth in the personal banking segment may take time to develop. A joint UN Capital Development Fund-UN Development Programme report issued earlier this year estimated that 95% of the adult population earned less than $10 a day, while only 5% had bank accounts.

The report adds that the majority of the country’s 60m population would benefit from the spread of microfinance services at the grass roots level, rather than large-scale banking. Myanmar’s rural regions, where some 70% of adults live and work, are in particular under-banked, despite some services provided by state-owned lenders and the limited number of microfinance institutions.

Opportunity for expansion are present in the market given the high level of informal financial services, which imply potential demand for regulated services.  It is unlikely that major overseas banks would move to expand into rural regions even if granted permission to offer full services till such time as the impact of Myanmar’s strong economic growth spreads beyond major centres, or foreign clients operating in these areas push for wider financial services.

In the meantime, domestic banks may look to increase their profile in non-urban areas. With government targets set at reducing poverty levels from the 2013 rate of 26% to 16% by the end of 2015, potential for a solid rise in incomes and demand for financial services in regions beyond the major cities exists.

Lenders also need to work hard to change the perception of the banking industry amongst the citizens of Myanmar, Aung Thin Win, Vice chairman of the Asian Green Development (AGD) Bank, a smaller domestic bank, told OBG. “The banking crisis of 2003 reduced peoples’ confidence in the banking sector. It is up to the banks to reinstall their confidence”.

Michael Nesbitt, Editorial Manager for Myanmar at Oxford Business Group (OBG) is in charge of producing sector specific research in Myanmar. Based in Yangon he works alongside a team of analysts to produce OBG’s Flagship annual reports which offer unique insights coupled with a comprehensive review of investment opportunities in key growth sectors.