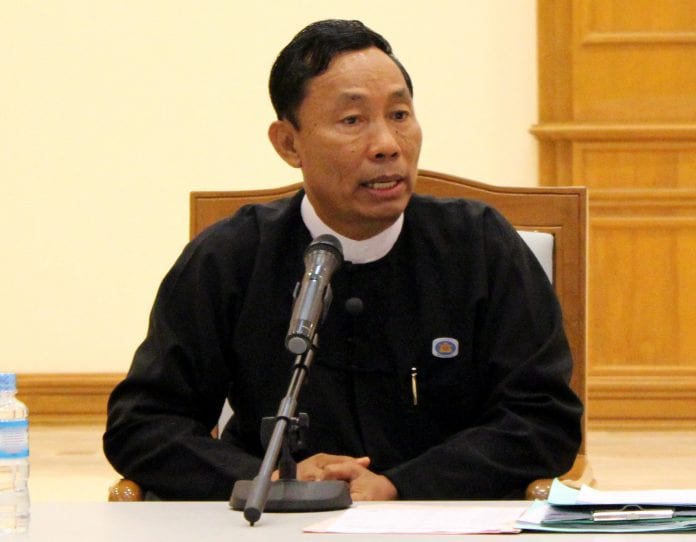 Myanmar's constitution cannot be changed until after next year's general election, the speaker of parliament said, casting doubt on the chances of Nobel laureate Aung San Suu Kyi becoming president and the military's political power being weakened.

Lower house chairman Shwe Mann reaffirmed his intent to run for president himself and said amendments to the constitution, which bars Suu Kyi and gives the military a legislative veto, could only be changed after a new parliament convenes after the poll late next year.

Shwe Mann's comments are likely to cause a stir amid simmering political tensions between political leaders ahead of the vote that will decide who will run Myanmar until 2020.

"We can't afford in the present political and administrative scenario to make any mistakes in amending the constitution right now," he told reporters in the capital Naypyitaw, comments that were broadcast on Radio Free Asia on Wednesday.

After several years of astonishing change in the wake of the country's shift from military rule to a semi-civilian system, critics say Myanmar's reforms have stalled and the military is reasserting itself amid challenges to a political stake it guaranteed itself when it drafted the 2008 constitution.

Shwe Mann, who was third in command of the junta before it ceded power in 2011, is an influential figure who has sought to appear magnanimous in supporting Suu Kyi running for president, but says that decision rests with elected lawmakers.

He said a referendum on amending the constitution could be held in May, but any changes agreed by the public would be introduced after a new parliament was elected. That means the legislature would retain a 25 percent quota for the military that ruled Myanmar with an iron fist for 49 years.

Suu Kyi's National League for Democracy Party (NLD) said Shwe Mann had no right to say when the constitution would be changed.

"Shwe Mann doesn't have the power to make this decision. It's up to lawmakers and parliament to make it," spokesman Nyan Win said. "It's a pity he didn't offer any reason … if he did, we would be able to talk about it."

The NLD compiled a petition with nearly five million signatures in July calling for changes in a clause that would essentially weaken the military's legislative powers and allow amendments to be made easier.

Among the controversial clauses is one baring Suu Kyi from the presidency because her children hold British citizenship, which U.S. President Barack Obama last week said "doesn't make much sense".