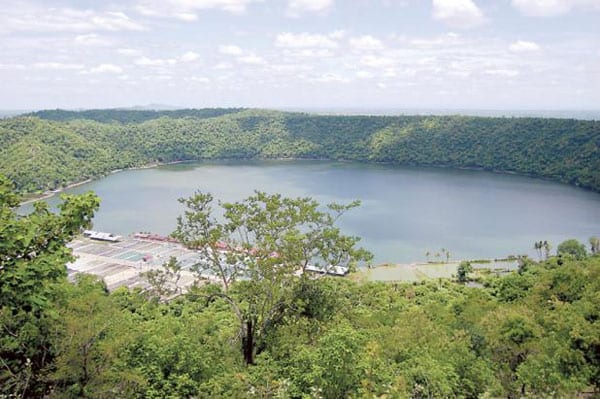 Myanmar is planning to nominate Twin Taung Lake, where very rare Spirulina is found, for inclusion in the world heritage list, according to the Ministry of Environmental Conservation and Forestry.

Spirulina is reported to be on the verge of extinction and the nomination of the lake is to save the rare Spirulina.

Other reports said lakes in Mexico and Kenya, where Spirulina is also found, have been damaged.

Twin Taung lake is about 9 kilometers away from Budalin in northwestern Sagaing region and is about 200 meters above the surrounding area.

Experts said the whole lake was filled with Spirulina in March in the past; but now it has already lost its peak season.

River water had flown into the natural lake since 2008, but did not seriously hit production of Spirulina until 2012, they said, but adding that since early 2013, green Spirulina has turned yellow and production has fallen, signaling that the ecosystem of the lake has been damaged by the inflowing river water.

Natural Spirulina is found only in Myanmar and China in Asia.

Myanmar has made achievements in cultural heritage preservation efforts with its three Pyu ancients cities, namely Hanlin, Beikthano and Sri Kestra recently being inscribed by the UN Educational, Scientific and Cultural Organization (UNESCO) into its World Heritage List for the first time in June.

Myanmar, being a signatory to the World Heritage Convention since 1994, has been cooperating with the international in striving for preservation of its cultural heritage.

Moreover, Myanmar was also trying to nominate another ancient city of Inwa to be included in UNESCO's world heritage list and work on preserving the Inwa Cultural Heritage Zone near northern Mandalay is being carried out. Xinhua