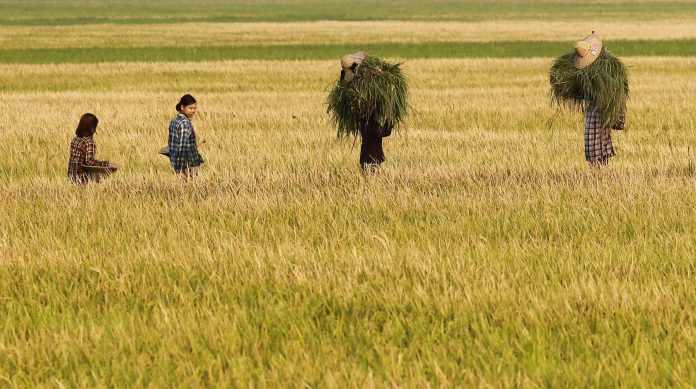 Myanmar can export up to 2 million tonnes of rice this year as it makes progress on tapping the rising demand in China and pushing its giant neighbour to lift an import ban, industry insiders say.

The Myanmar Rice Federation (MRF) recently met with Chinese Embassy officials in Yangon in a bid to start negotiation regarding legalising rice imports into China from Myanmar. The meeting was prompted by a campaign led by the Chinese government seizing rice imported from Myanmar in the Chinese border town of Shweli and other places that nearly halted rice trade across the border, hurting rice traders in Muse, the border town on Myanmar side.

Rice from Ayeyarwaddy, Bago, Sagaing, Magwe and Yangon regions is mainly exported through Muse, with an estimated 80 percent of Myanmar’s total rice exports going to China. However, while it is legal for Myanmar traders to export to China, it is illegal for Chinese buyers to import the rice.

“We need an agreement on health inspection. Then we’ll try to get a deal on export quota and tariff-free exports,” U Aung Than Oo, president of Myanmar Rice and Paddy Traders Association (MRPTA), told Myanmar Business Today.

A Chinese team of four experts, including the deputy director general of the Administration of Quality Supervision, Inspection and Quarantine (AQSIQ) visited Myanmar during the last week of August, and inspected the production and distribution chain of the rice industry as part of the negotiation for official rice exports.

The team said it has found satisfactory results and also that rice farmers in Yangon and Bago regions as well as Nay Pyi Taw are using a minimal amount of chemical fertilisers and pesticides.

The agreement to legalise rice exports to China is set to be finalised with the Chinese Minister for Agriculture during the ASEAN Agriculture Ministers Meeting, which will be held from September 20 to 26 in Nay Pyi Taw, according to MRF. After the agreement is signed, a yearly export quota will be agreed on by the two sides, and exports will follow before the end of the year.

“We have been exporting rice to China so far based on the mutual understanding but we can’t export officially unless there’s a deal with AQSIQ. Right now we can’t do anything if they block exports on the grounds of low quality,” U Chan Thar Oo, chairperson of Muse Rice Wholesale Board, told Myanmar Business Today.

In 2013, Myanmar exported about 746,000 tonnes of rice to China through informal border channels. Rice exports to China have increased by about 125 times since 2011, according to a June World Bank report.

“China has a high demand requiring 4 to 5 million tonnes of rice every year. This year’s rice export can reach up to 2 million tonnes,” said U Ye Min Aung, secretary general of MRF.

However, relying too much on a single market can create risks as any fluctuation in the market can have significant impact on the export country, he said, adding that it is necessary to diversify the industry and its market opportunities.

“Currently the major export destination is China followed by Africa. But exports to Africa dip during the monsoon season. As for new markets, Europe is providing good prospects as Myanmar has received GSP status,” Dr Soe Tun, joint secretary of MRF said.

Myanmar has exported 1.2 million tonnes of rice during 2013-14 fiscal year and has set a target of exporting up to 3 million tonnes in the current fiscal. According to the Ministry of Commerce, Myanmar earned $196 million from April 1 to August 15 by exporting 530,000 tonnes of rice, up 41 percent from $138 million exported during the same period in the last fiscal year.

Regional rivals Vietnam and Thailand are each exporting around 10 million tonnes every year. Myanmar Rice Federation is also planning to do workshops with Myanmar Rice and Paddy Traders Association and Myanmar Rice Millers’ Association to ensure quality standards in each stage of production and export.