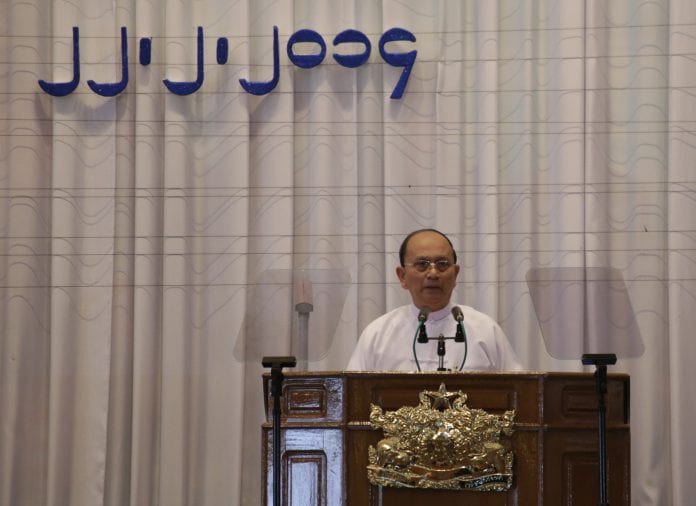 Myanmar is in discussions with many countries to lower tariffs on its goods or gain duty free access in a bid to help local exporters survive stiff competitions in the international market, President U Thein Sein said.

“We have already been granted Generalised System of Preferences (GSP) facilities by the EU. Talks are underway with other countries to gain further lower tariffs and duty free privileges,” U Then Sein said at a meeting with private entrepreneurs and representatives of business organisations at Yangon regional parliament recently.

He said the government has been “successful in its endeavour to remove economic sanctions” that were imposed by the international community because of the previous military regime. Since it came to power in 2011, the quasi-civilian government under U Thein Sein’s leadership embarked on swift political and economic reforms, which were rewarded by Western governments through lifting of sanctions, debt cancellations and development aids.

“If we can liberalise trade and carry out more reforms, it will allow us greater linkages with international markets, which in turn will benefit our export-oriented industries,” the president said.

The government has already carried out wide trade liberalisation measures, by facilitating and promoting trade and providing trade education. It has also undertaken steps to allow citizens to have equal opportunities in the trade sector, suspended 10 percent export duty and 8 percent commercial tax, instituted measures that allow businesses to obtain business licences in Yangon and permitted certain business activities to run without requiring a licence.

Trade volume shot up from $15.27 billion in 2011-12 financial year to $21.7 billion in 2013-14 FY up to the second week of February, the president said to emphasise the country’s economic development in trade sector.

He said the Myanmar Investment Commission was established to facilitate foreign and domestic enterprises that want to invest in Myanmar. Between 2011 and December 2013, a total of 188 foreign investments poured in $8.2 billion in investment, while 145 local firms had put in K2.2 trillion ($2.23 billion), he added.

“Myanmar’s ASEAN chairmanship coincides with an important time when AFTA (ASEAN Free Trade Area) and AEC ( ASEAN Economic Community) are going to be materialised. While businesses based in Myanmar will have an advantage, it will be critical for medium and large businesses that rely on manufacturing and services to strike the balance between supply and value chain,” U Thein Sein said, calling for cooperation from the members of the business community.

“Development of our private sector is vital for the sake of our economic development,” he said, adding that the private sector accounts for 90 percent of Myanmar’s economy.

The meeting gathered more than 400 participants including private entrepreneurs from different sectors, representatives from business groups and parliamentarians.