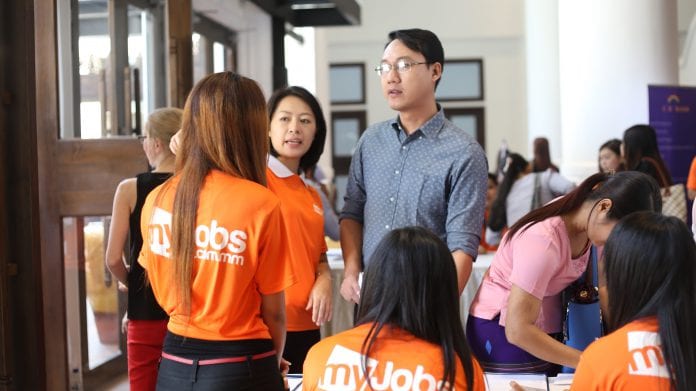 Active and vigorous recruitment in Yangon is likely to provide many opportunities to job seekers, according to the MyJobs Employer’s Survey. Employers in Yangon report strong hiring intentions this year, reporting the most aggressive recruitment plans in the last three years.

MyJobs, a leading recruitment company since 2012, questioned 84 employers, human resource professionals and recruitment managers about their recruitment plans for 2015 and found that a significant majority of employers (93 percent) intend to add permanent, full-time staff this year.

Owing to the tremendous growth of businesses in Myanmar along with political stability, confidence in the future among respondents was widespread. Majority said their organisation is more proactive about recruitment compared to a year ago.

The survey showed that a majority of employers plan to recruit new talent directly out of college, with 70 percent planning to hire fresh graduates in 2015, while 93 percent of employers plan to invest in staff training and development. Employers in the human resources, sales and marketing and accounting and finance report the most optimistic hiring outlook, it added.

Seven out of 10 employers surveyed are still recruiting graduates and therefore see the value they bring to the workplace. According to Patrick Seal, project manager of Cape Plc, “Essentially we are looking for graduates with strong communication skills and a positive attitude, so they can be developed into professionals. We see ourselves as playing a vital role in developing their technical knowledge through hands on learning and on the job training, thereby helping employees shape the future direction of their careers.”

The Myanmar economy is making great strides as caution gives way to confidence. The pace of hiring has quickened in 2015, as more employers plan to add staff since the start of the year. (MyJobs) online clients have increased by 400 percent from March 2014 to March 2015. The number of candidate placements we have made in first quarter 2015 has also increased by 200 percent, compared to the 1st quarter in 2014. The increase in job opportunities unquestionably indicates economic progression of the country.

Myanmar has made sweeping economic reforms in foreign investment and trade over the last 3 years, including the introduction of laws in a number of key areas. Most notable are the Foreign Investment Law released in 2012, the Special Economic Zones Law in 2014, the Telecommunication Law in 2014, grant of licences to international banks and oil and gas companies in 2014, among others. This has generated a great deal of interest among companies worldwide to contribute to the frenetic pace of economic transformation. Private businesses and governments around the world are equally keen to participate in the country’s growth and at the same time earn an attractive return on their investments. These developments are producing a tremendous increase of job opportunities in Myanmar.

According to Directorate of Investment and Company Administration (DICA), the total number of foreign companies already given the go-ahead to operate in Myanmar has increased from 459 in June 2014 to 633 in March, indicating a 38 percent rise in less than one year. The foreign investments into the country have also increased from $37 million in June 2014 to $44 million in March, indicating a 19 percent growth. The top three sectors in foreign investments as on March is occupied by 38 percent in oil and gas, followed by 30 percent in Power and 10 percent in Manufacturing.

Booming economy has an almost inexhaustible need for infrastructure. Despite the rise in the foreign investments there are significant gaps in Myanmar’s infrastructure development. The Logistics Performance Index (LPI) by the World Bank, ranked Myanmar 133 out of 155 in 2012.

To plan, build and maintain this infrastructure, the nation will need millions of highly skilled workers, including engineers, architects, designers, and project managers. They will also require low-to-medium skilled workers, including technicians, labourers, construction workers and operators. Similar need of human resources exists in all developing sectors such as oil and gas, power, manufacturing, transportation, telecommunication, real estate, hotel and tourism and others.

To build and sustain their growth and development, Myanmar economy will need an enormous enhancement of their human capital – a challenge that will require massive investment in recruitment, engagement, development and retention of both domestic and international talent. This will go a long way in robust economic development of the nation, helping to fulfil its enormous potential and building a liveable and sustainable Myanmar.

Jemin Popat is managing director of MyJobs.com, which he established in 2012. Jemin is an entrepreneur and recruitment specialist from the UK with over 13 years’ recruitment experience. Views and opinions expressed in this article are the author’s own and don’t necessarily reflect Myanmar Business Today’s editorial opinion.

Facebook
Twitter
Pinterest
WhatsApp
Previous articleWith Industry in Its Infancy, Civil Choppers Hope to Kick Up Dust
Next articleOoredoo to Get New CEO for Myanmar Unit