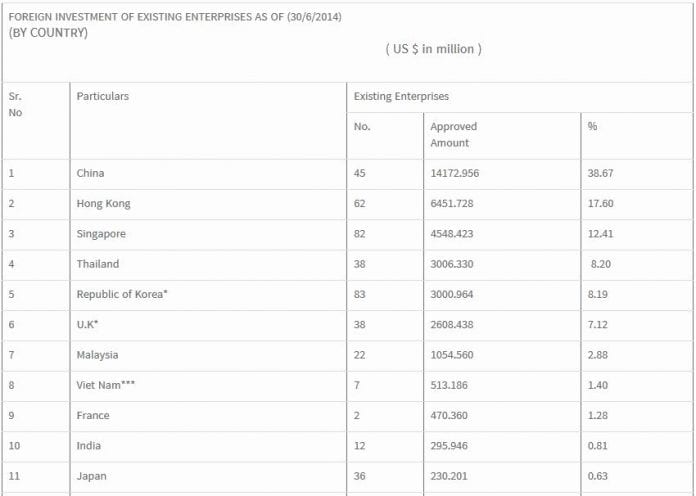 Myanmar has revised its forecast for foreign direct investment (FDI) to more than $5 billion for the fiscal year that began in April, a senior official said last week, surpassing earlier expectations and led by new ventures in energy and telecoms.

The figure exceeds an earlier estimate of $4 billion, with investments in the first five months of this fiscal year worth $3.32 billion, said Aung Naing Oo, secretary of the government-run Myanmar Investment Commission (MIC).

That sum was more than half of the annual target set earlier and up 113 percent over the corresponding period a year prior.

“Considering the rapid growth in the inflow of FDI in the first five months during this fiscal year, we’ve revised our estimates,” he told Reuters. “It will be over $5 billion.”

The surge in investment follows a series of political and economic reforms launched three years ago by President Thein Sein, a former general who has overseen Myanmar’s transition from decades of military rule and international isolation.

The suspension of most sanctions by the European Union and the United States, in place since the 1990s over the poor human rights record of the former junta, has allowed more investment to flow into a country rich in energy and mining resources and strategically located between India, China and Southeast Asia.

Aung Naing Oo said 31 percent of the investment received by the end of August was in the telecoms sector, with 23.8 percent in oil and gas and 18.4 percent in real estate. Hotels accounted for 13.3 percent and 8.1 percent went into manufacturing, primarily garments.

Despite its business potential, Myanmar still trails neighbouring markets in terms of foreign investment this year. Thailand received $6.8 billion in the period from January to June, according to the central bank, while Vietnam recorded $7.9 billion of investment for the first eight months of 2014.           Reuters