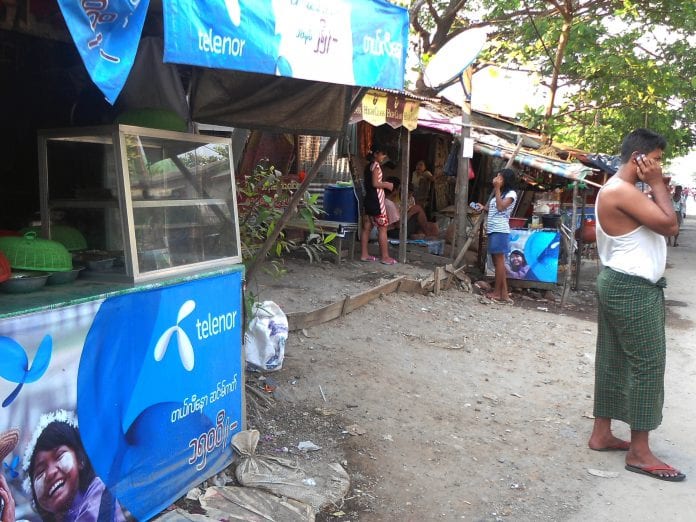 Investment in telecoms has surged in Myanmar in the past year as operators begin to tap a rapidly expanding market, driving growth in the economy.

Since the opening up of the mobile segment last year, there has been a boom in phone ownership and subscriptions in Myanmar. Currently there are more than 18 million SIM cards in circulation − corresponding to about one-third of the population − up from just 1 million in 2012, according to data compiled by Reuters.

Norway’s Telenor started services in September last year, one month after the launch of Ooredoo of Qatar, with both granted licences over a year ago. The newcomers have quickly gained ground on existing operator Myanmar Posts and Telecommunications (MPT), though the former monopoly and its partner KDDI Corp of Japan still lead in market share in what is a rapidly expanding sector. MPT has 8.4 million subscribers, followed by Telenor with 6.4 million and Ooredoo with 3.3 million.

The increased competition has seen SIM costs plunge from around $200 in mid-2013 to just $2 more recently, while service costs are also expected to fall further as the three networks expand their reach into rural areas.

While MPT has the widest coverage at present, reflected in its higher subscription figures, it is being challenged by both Ooredoo and Telenor, which have extended their reach to 41 percent and more than 50 percent of the population, respectively.

The increased coverage and broader access to voice and internet services will be a driving force for economic growth, according to Petter Furberg, CEO of Telenor Myanmar. In an established economy, a 10 percent increase in mobile penetration can lead to a 1.2 percent jump in GDP, Furberg told OBG. This may be even higher in certain countries. “In emerging economies such as Myanmar, the effects are even more pronounced: 10 percent more internet availability could lead to a 3-5 percent boost in GDP,” he said.

Ross Cormack, CEO of Ooredoo Myanmar, said banking was another area expected to benefit from an expanded telecoms sector. The change is likely to come from increased penetration of banking services, which currently remains limited with just 5 percent of the local population having a bank account, Cormack said.

“The banking system will become a great example of the technological leapfrog we hear about so frequently when discussing Myanmar,” he told OBG. “Mobile money is critical to ensuring that financial inclusion is a safe, convenient and affordable option for the nation.”

The telecoms sector has been a major driving force behind a rise in foreign direct investment (FDI) over the past year, with Telenor and Ooredoo investing in infrastructure, as well as fulfilling their fiscal obligations under the licensing agreements.

The sector also faces a 5 percent commercial tax as of June. Until now, the industry had been exempt from the tax, but this is due to end shortly, with revenues generated from the tax to go towards health, education and transport projects, according to officials.

In the first five months of the 2014-15 fiscal year, telecoms accounted for 31 percent of total FDI of $3.32 billion, becoming the biggest single component in direct capital inflows, according to data issued by the Myanmar Investment Commission. The flow eased in the latter half of the year, but still attracted a quarter of all FDI during the year, ranking it second only to the energy sector.

Peter Tropper, senior advisor at Emerging Markets Private Equity Association (EMPEA), said the surge in investments and the expansion of the telecoms sector signalled an improving economic climate in Myanmar as well as a rapid modernisation of the market.

“Until recently we had the lowest cell phone penetration in the world – lower than North Korea,” he said during an investment seminar in Bangkok in late April. “By next year it is expected to reach 80 percent.”

Strong signals for the future

Thanks to a fast expanding consumer base, the telecoms sector’s long-term prospects remain bright.

According to a study by the McKinsey Global Institute (MGI), the international consultancy’s research arm, Myanmar’s per capita income could rise from the present level of $900 to $5,100 by 2030.

In turn, this would likely drive rapid growth in the country’s consumer class, defined by MGI as those having incomes high enough to make them significant consumers of goods and services. The number is estimated to rise from 2.5 million people to 19 million over the same period, with consumer spending almost trebling to $100 billion.

This steep upward curve in income will feed into higher demand for advanced communications technology and services, indicating strong earnings potential for both suppliers and providers.