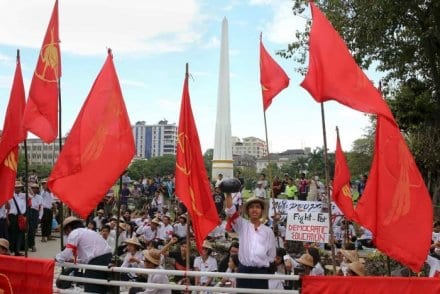 Hundreds of Myanmar university students marched through Yangon for a third day in a row, in a rare and illegal protest against a new education law they say will curb academic freedom.

Protesters carried bright red flags emblazoned with a golden fighting peacock, a national symbol since the time of the Burmese monarchy.

Students punched the air as they shouted slogans.

The demonstrations follow two protests over the past month over the death of journalist Par Gyi under mysterious circumstances while in military custody on October 4.

Some observers says the protests may be a sign of growing frustration with the government.

The government says the new higher education law will give universities more autonomy and allow an independent body to coordinate their functions.

The students say the body will actually reduce autonomy.

"Students are protesting the National Education Law because it does not represent the interests of the people and the students," said Kyaw Ko Ko, a leader of the All Burma Federation of Student Unions (ABFSU), one of the protest organisers.

"The law will be an obstacle to academic freedom and the development of education," he said.

Myanmar once had one of the best university systems in South East Asia.

Standards plummeted during nearly five decades of military rule as the government clamped down on academic independence and freedom.

Sunday's protest started at the east gate of the gold-spired Shwedagon Pagoda, the nation's holiest shrine, where opposition leader Aung San Suu Kyi gave her first public speech before 500,000 people in 1988, and where Buddhist monks launched anti-government protests in 2007.

The student demonstrators appropriated many symbols of earlier protests.

Some had straw hats similar to those worn during 1988 student protests and sang songs from then.

One student at the head of the demonstration carried a monk's alms bowl turned upside down over his head, a Burmese symbol of protest borrowed from Buddhist monks who marched through Yangon in 2007 holding overturned alms bowls to symbolise their break with the government.

The protests began on Friday when some 350 students gathered in Yangon and marched through the streets.

On Saturday, students marched to Yangon University, where they scaled its locked gates.