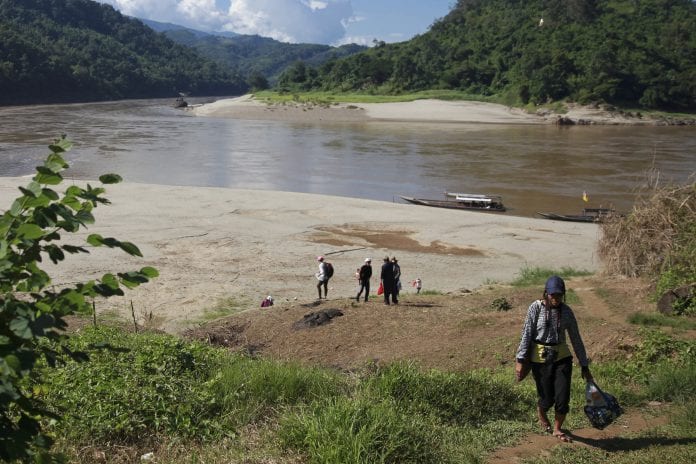 Tikuepor, an ethnic Karen from eastern Myanmar living on the Thai side of the Salween River, is one of thousands of people worried about losing everything if a multinational hydropower project goes ahead in this sensitive border area.

A senior commander of the Karen National Liberation Army (KNLA), which claims to control land in Myanmar affected by the project, says the Myanmar military has moved more troops into the area and this could derail peace talks with the government.

Tikuepor was only 13 when she fled her village in eastern Myanmar to escape a campaign by the Burmese military against ethnic armed rebels, during which troops terrorised civilians to stop them supporting the rebels.

Now 54 and living in Sob Moei, a Thai village beside the fast-flowing Salween, she fears what little she knows of the hydropower project.

“I don’t have a Thai citizenship card. We don’t have titles for the land we live on,” said Tikuepor, who goes by a single name, sitting on a bench in the school grounds. “We won’t receive any compensation if we have to leave this village.”

Sob Moei is located 47 kms (30 miles) upstream from the site of the long-planned 1,360-megawatt Hatgyi dam in Myanmar.

Environmental activists say Hatgyi, aimed at harnessing the power of the Salween, Southeast Asia’s second longest river, could displace thousands of people, block fish migration routes and reduce the food and jobs on which riverine people depend.

Communities in the area are already marginalised – many are poor, uneducated ethnic and religious minorities living in remote places.

General Baw Kyaw Heh, KNLA’s vice chief of staff, has said the Burmese troop deployment to the area threatens to derail peace negotiations between the government and ethnic armed groups.

Burmese also object to the fact that most of the electricity to be generated will go to Thailand, leaving little for energy-starved Myanmar.

Hatgyi is being developed jointly by Chinese, Thai and Burmese investors, including the Electricity Generating Authority of Thailand (EGAT) and IGE, a Burmese company dealing in timber, oil, gas and mining.

IGE is linked to the sons of Aung Thaung, a prominent Burmese lawmaker blacklisted by the United States for “actively attempting to undermine recent economic and political reforms.”

Thana Puttarangsri, EGAT’s manager for international issues, told the Thomson Reuters Foundation the completion of Hatgyi depended on decisions by partners but refused to comment further and did not pick up subsequent calls.

Myanmar’s Energy Ministry was also not available for comment despite numerous calls.

The Salween rises on the Tibetan Plateau and flows some 2,400 kms (1,500 miles) through China, Thailand and Myanmar to the Andaman Sea, crisscrossing many of Myanmar’s ethnic minority areas.

Six million people live in the Salween watershed and depend on the river for jobs and nutritious food, according to the WWF. Campaigners say six dams are planned in Burma and 13 on the upper Salween in China.

In Sob Moei, a remote village at the confluence of the Moei and Salween rivers, about 40 families share Tikuepor’s plight, according to the village’s Thai-Karen headman, Decha Srisawaidaoruang, 30.

The village has no electricity or phone signal, though WiFi is available in the school grounds. It is an hour’s boat ride from the only pier along the Salween in Thailand.

“There have not been many channels to voice our concerns about this dam and we do not have access to decision makers,” said Decha.

Civil society groups are concerned that Thailand’s military rulers may allow EGAT and the Thai energy industry to push the project through without assessments of its impact on people living nearby, said Pianporn Deetes, campaign coordinator for the environmental group International Rivers (IR) in Thailand.

Information about the project has been minimal, she said. “The last environmental impact assessment that was conducted was not made public.”

“We’re just asking the Thai government and Thai energy utilities to behave as they do at home, to comply with Thai laws that require social and health impact assessments on large-scale infrastructure projects,” she said.

“With such large-scale investment and a flood of money coming into the area, there are likely to be lots of conflicts. The villagers will face the direct cost of militarisation and fighting,” he told journalists at Ei Thu Ta camp.

Ei Thu Ta, 90 minutes upstream from Ban Sob Moei and on the Myanmar side of the river, was set up around 2006 for over 3,700 displaced Karens who say they fled abuses by the Burmese army.