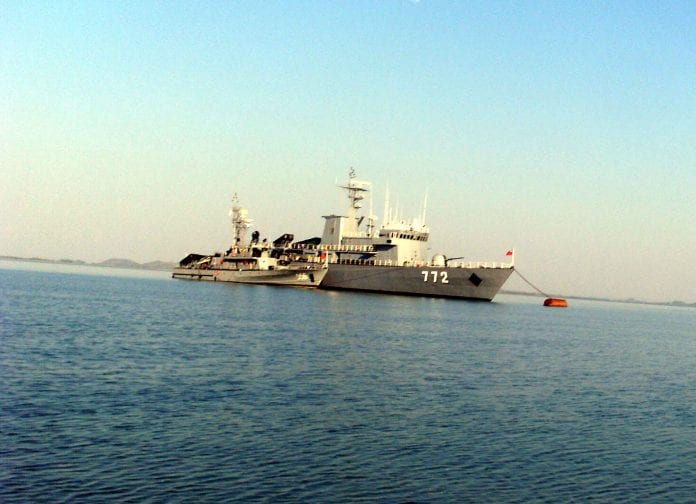 Waterway improvement of Kaladan river in Myanmar’s western Rakhine state will be finalised by March 2015, a transport ministry official said.

The project comes as part of a comprehensive development plan of the river by Myanmar and India – Kaladan Multi-Modal Transit Transport Project. The $500-million project aims to connect the eastern Indian seaport of Kolkata with Sittwe port in Myanmar by sea and link Sittwe to Mizoram via river and road transport.

Construction of Sittwe port and expansion of Kaladan river, which constitute the first phase of the cross-border project, have reached 70 percent completion, U Mya Than, head engineer of Civil Engineering Department under the Ministry of Transport, said.

“Two docks in Paletwa located on the bank of Kaladan river will be fully constructed by March 2015. Currently 6,000-tonne ships can dock at Sittwe and up to 20,000-tonne ships will be able to dock later.

“The construction of six watercrafts has seen much progress with 80 percent of the body frameworks finished. The waterway navigation posts will be fully installed by 2015,” he told Myanmar Business Today.

The project also includes a plan to connect Satpyitpin or Kaletwa, Sittwe, the capital of Rakhine state, to Indian border by constructing a motorway with planned $50-million investment.

“As the waterway around Paletwa is not suitable for ships due to abundant sandbanks and rocks, we are developing an inland road between Paletwa and Kaletwa.

“The waterway can carry more goods than the inland road. A part of the inland road is being built by Public Construction Department from Myanmar and the other part by Indian authorities. We will calculate the cost for the road and submit it to the Indians government,” he said.

Kaladan river has originated from Lu Shae mountain ranges and flows through Mizoram state of India and southwards into Chin state and then enters Rakhine state passing the town of Palatwa and afterwards merges into Bay of Bengal through Sittwe. It is some 600 kilometres long with nearly 300km flowing through Myanmar.

The project, which was launched in 2008, will reduce distance from Kolkata to Sittwee by about 1,320 kilometres and will reduce the need to transport good through the narrow Siliguri corridor, also known as ‘chicken’s neck.’

“We will rush the construction of the road with funding from India. We will allow tax exemption for one year as a trial run. There will be no charges for passage but service fees for loading or unloading goods will be charged,” the official said.

Development project of Kaladan river will be implemented in three phases while the first phase will see the improvement of Sittwe port to facilitate the passage and mooring of 6,000-tonne ships, the increasing of the water depth at the port to 562,000 cubic meters and construction of a 219 metre long and 15 metre wide dock to harbour over-20,000-tonne ships.

The Sittwe port development project includes the upgrading of existing docks to receive 2,000- and 3,000-tonne ships and the construction of 29 warehouses in the port area.

The second phase will see the clearing of a 158-kilometre section of the river between Sittwe and Paletwa including dredging in shallow areas, expanding the banks in constricted areas and construction of warehouses at Paletwa from which a motorway will connect to Mizoram.

The third phase will see the construction of a 129-kilometre highway between Paletwa and Mizoram. The highway from Tedim in Chin state to Sittwe, which will also connect to the Paletwa-Mizoram highway, is expected to provide a new trade channel.