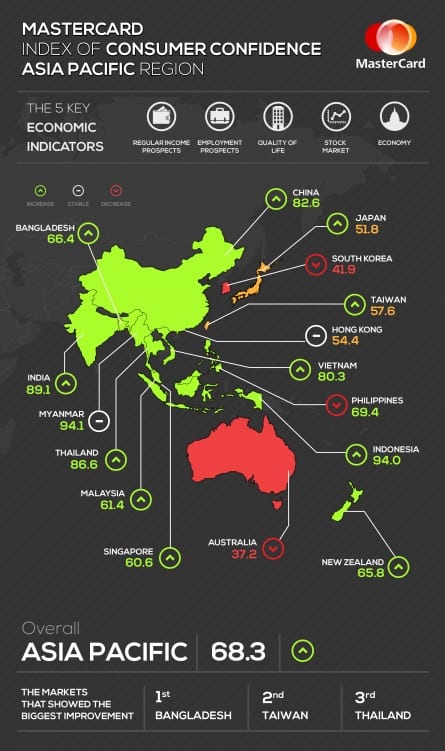 Consumers in Asia Pacific largely remain optimistic on their economic outlook despite continued uncertainty in the global economy with the exception of Australia, the survey revealed.

Respondents were asked to give a six-month outlook on five economic factors including the economy, employment prospects, regular income prospects, and their quality of life. The Index is calculated with zero as the most pessimistic, 100 as most optimistic and 50 as neutral.

“Consumer confidence across the Asia Pacific region has reached its highest level in more than 10 years. Markets like Bangladesh and Taiwan are showing strong increases in consumer sentiment, bolstered by key influences such as a perception of better employment prospects and of an improving economy,” said Pierre Burret, Head of Delivery, Quality & Resource Management for Europe, Asia Pacific, Middle East & Africa, MasterCard Advisors.

“The region’s overall optimism for the future is an encouraging sign, and demonstrates the importance of continuing to innovate with partners in emerging markets like Myanmar, India and Indonesia, in efforts to drive economic growth,” he added.

Collectively, the Asia Pacific markets are optimistic – recording the highest consumer confidence score in more than 10 years. The region is up 6.9 Index points to 68.3 Index points in the first half (H1) of 2014 from 61.5 Index points in H2 2013.

Compared to six months ago, twelve out of the 16 Asia Pacific markets surveyed recorded both positive sentiment and experienced either some or significant improvement in consumer confidence. Four markets moved above the 50 point neutral mark in this survey, leaving only Australia and South Korea as the only markets out of the 16 to remain below the 50 point neutral mark.