Myanmar: Transitioning to A New Era 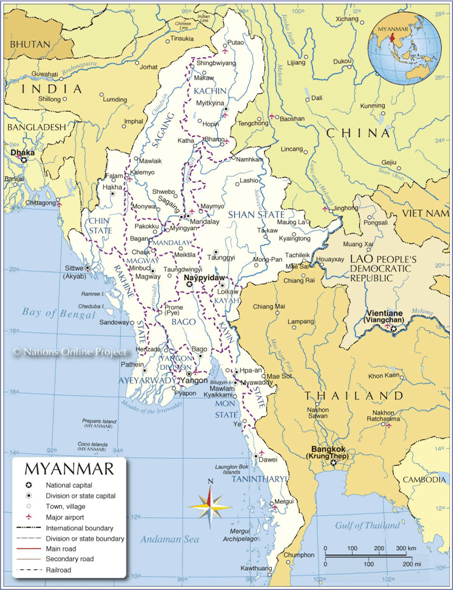 After more than four decades of isolation, Myanmar has embraced a reformist stance with a series of pro-development policy measures to catch up with its ASEAN peers and to integrate itself into the regional and global community.

On the macro front, Myanmar’s economic growth rates are likely to remain positive with the country starting from a low base and foreign investments flowing in, though concerns would be the build-up in inflationary pressures and external imbalances.

Myanmar’s geographic location, population base, abundant natural resources, and decades of underinvestment are attractive factors to investors. The challenge though is for the government to maintain its reform momentum and keep infrastructure bottleneck and inflationary pressures in check.

Myanmar emerged from more than four decades of isolation and military rule, by holding its first general election in 20 years in 2010. This was a turning point for the country, as the military made its transition to a civilian democracy that paved the way for the opening and reform of the economy. 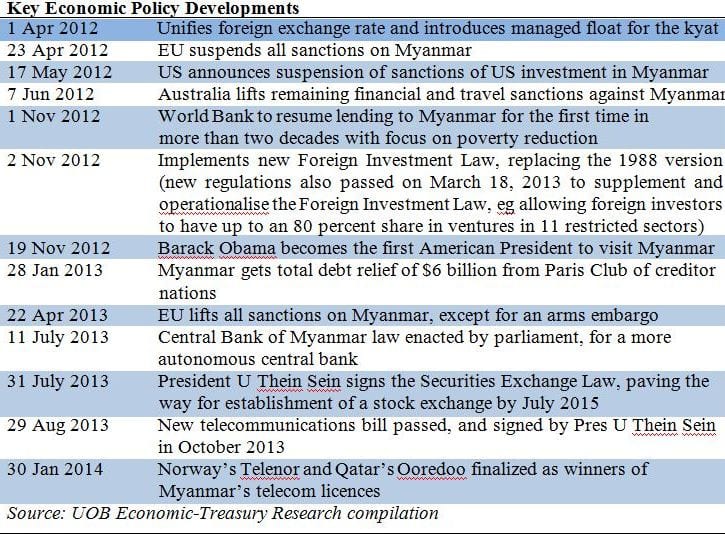 Since then, political development and economic policy reforms have proceeded in a fast pace, as seen in pro-development laws enacted in various sectors, the main one being the Foreign Investment Law passed  in  November  2012.  And  foreign  investors  and  companies  have  taken  notice  and  shown eagerness in what is termed as the last remaining “frontier” economy in Asia. This has resulted in foreign direct investments surging to $3.6 billion in FY2013/14, nearly three times from $1.4 billion in FY2012/13, and is on track to hit $4 billion in FY2014/15, according to media reports in March 2014 citing Directorate of Investment and Company Administration.

Following the hosting of the ASEAN Games in 2013, Myanmar’s holding of ASEAN chairmanship in 2014 will showcase further the country’s progress of integrating itself into the regional community. So far in 2014, Myanmar has anchored the ASEAN foreign ministers retreat in January, the ASEAN Finance Ministers Meeting recently (1-5 Apr 2014), among others. The next major event in terms of integration will be the establishment of the ASEAN Economic Community at end-2015.

Since its first general election in November 2010, the Myanmar government has been making significant changes in its business and investment laws as well as economic policy, to make up for decades of lost time and to integrate itself into the global economy. The government leaders had realized that continued isolation would no longer be a viable option for Myanmar, especially as ASEAN neighbours around it have been making significant economic progress and are working toward becoming part of the integrated ASEAN Economic Community by end-2015. 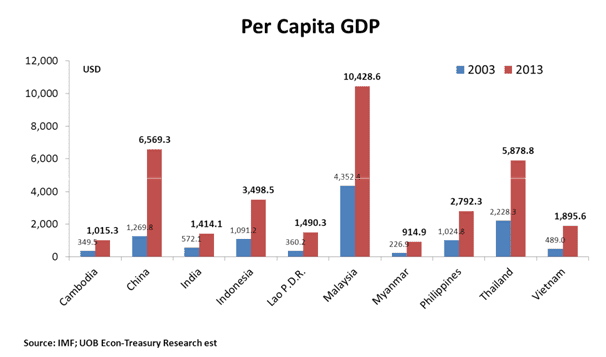 This is reflected in the comparison of per GDP figures around the region, which shows a vast improvement over the past decade, while Myanmar lagged behind despite starting from a relatively low base. For instance, neighbouring ASEAN members have seen their per capita income into the $1,000+ level in 2013, from the $300-500 range a decade ago. However, Myanmar remained below the $1000 level despite starting from a lower base of just slightly more than $200. Other countries have made even more impressive improvements during the decade, especially in China’s case which started off around Indonesia and Philippines level of income, but has now far exceeded the two in terms of income.

However, growth prospects are positive for Myanmar, with IMF projecting in its latest staff assessment report (March 2014) that the country could bolster confidence further with successful political reforms ahead of the 2015 elections. The IMF revised up Myanmar’s 2012/13 growth to 7.3 percent, with a projected economic growth rate of 7.75 percent by 2014/15 as construction accelerates and services growth remains strong. Meanwhile, IMF expects domestic inflation rate to reach 7 percent at end-2014/15 (from 6.7 percent at end-2013/14) on higher electricity prices and demand pressures. Current account deficit is projected to deteriorate to 5.1 percent of GDP in 2014/15 (from -4.8 percent in 2013/14) on the back of rising imports, which are expected to be more than offset by rising FDI-related inflows.

Overall, the latest assessment by IMF staff is positive, but highlights the vulnerability of the country’s external balances and inflationary pressures, a condition that is common especially for an early emerging economy like Myanmar where infrastructure is playing catch up after decades of lagging its peers, an area where the government needs to manage well. The fact that Central Bank of Myanmar has been given more autonomy and that the exchange rate is on a managed float basis show that the country is moving in a right direction.

Certainly, there is much catch up for Myanmar to do. Infrastructure is severely lacking as just slightly more than 32 percent of its population is urbanized (compared to say 50.7 percent for Indonesia and on par with Vietnam’s 31 percent and better than Cambodia’s 20 percent), and less than half of its population has access to electricity (compared to nearly 100 percent for Vietnam and 73 percent in Indonesia), according to the World Bank. Other key spending metrics also show that Myanmar is trailing the pack on a global basis, such as health care spending and education spending.

Nevertheless, Myanmar possesses significant advantages and opportunities that place itself in a favourable position:

–    Its geographic location as the crossroads between China and India, linking natural resources, transport network, and markets;
–    Access to the Indian Ocean;
–    Large population base of 60 million, and within the larger ASEAN population of 600 million
–    Myanmar itself possesses abundant resources, with the world’s 78th largest oil reserves and 41st largest gas reserves, for example.
–    Starting off from a low base means demand for even the most basic infrastructure investments

Decades of under-investment also present opportunities for both foreign and domestic investors in areas such as:

–    Energy, oil and gas related: refinery, power generation, power grid
–    Construction/development of hotels, apartments, condos, housing: this is both to address the shortage for visitors and the anticipated urbanization
–    Manufacturing: especially attractive to China and other MNCs
–    Education and health related sectors: spending to rise with income
–    Financial services

While opportunities are plenty, there are also risks and challenges to keep in mind, just like in any emerging economies that are beginning to turn to market-based developments. Most importantly for Myanmar, the momentum for economic reforms needs to be sustained well into the future even after such impressive track record in recent years (such as the new Foreign Investment Law, and exchange rate and central bank reform). Other challenges to be mindful of are infrastructure bottlenecks and inflationary pressures as investments pour in, as well as the need to develop quickly the financial sector so that credit can be allocated efficiently. Here, the freer floating kyat exchange rate and a more independent central bank will play a significant role in mitigating inflationary pressures and external imbalances, as well as in developing a full fledge financial sector.

Suan Teck Kin is a senior economist at Singapore-based United Overseas Bank. He joined United Overseas Bank in 2006 as an economist. He is responsible for economic and foreign exchange research with a primary focus on China, Hong Kong and Taiwan, and a secondary focus on Southeast Asia. As a member of the Economic-Treasury Research team, he presents the team’s market views to the Bank’s management team regularly and to the Bank’s clients in Singapore and the region.