Myanmar: Where it All ‘Bagan’ 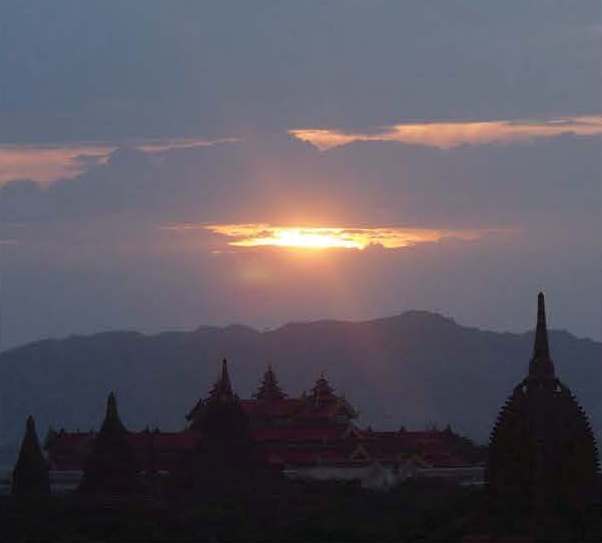 If Myanmar – a relatively-recent entrant to the mass-tourism market – were to be said to have a ‘tourist hotspot’ one such contender would surely would be Bagan (or Pagan), the hot, dusty, flat as a pancake ruins of an ancient city.

As a relative newcomer to Myanmar, from the great land down-under, spending something on the order of four weeks in-country with another ‘true-blue-Aussie-bloke’ I thought it might be good to go see the place they put on the postcards. Bagan.

You hear about it sometimes, like some far off place where the temples look like trees of a forest – especially given they chopped down all the trees to fire the bricks. And it’s true, it is like a forest, trees both big and small.

My parents travelled to Myanmar back in the day, but back then tourists could only come for a week, a day of which they spent in Bagan. But that was before the advent of e-bikes, so it was more of a cursory look – and less French tourists.

Let’s talk about the French tourists for a minute; maybe it’s just me but it seems like wherever I go in this great land at the end of the road, somewhere, a French guy (or girl) has been there first. Where the French go, we follow.

It’s debatable as to whether it was the Mongol invasions of the 13th century did it in, or rather the resultant collapse of the Bagan empire, but the city and its environs were swallowed up by wind, rain, the river and time itself, abandoned by the empire to which it gave its name.

Time is all around you, wherever you look the ubiquitous spires poke above the brush that grows thick around the river – before thinning out in the drier plains to the west. The stupas and pagodas weathered by thousands and thousands of nights and days of wind and rain that rolls up the Ayeyarwaddy.

To visit in the off-season, a time when rain isn’t quite around the next corner – but still close enough at hand, is both at times unusual and advantageous. In this sense Myanmar’s tourism industry is a great place for the value-hungry to look. Bagan is known for being a hot place, but it’s hotter still when it’s the hot time of the year, if you come in the off-season you’re a little more likely to get wet but you’re far more likely to avoid the heat.

All through town – old, new and NyaungU – there’s vacancy and a somewhat unsettling lack of the requisite of a tourist hotspot; the tourists.

The sunrise/sunset in Bagan seems to work like a beacon, drawing tourists out of their hotels and guesthouses, out and up, towards the ‘sunset temple’. Although when we arrived the French had got there before us and set up their cigarettes and sprite picnic.

We were lucky enough to be able to do Bagan from the comfort of one of the e-bikes, we were also lucky enough to run out of juice right where we needed to and ran into a couple of French guys who’d also found that a bikes charge wasn’t quite enough to get you all the way.

Due to it being the wet season we were treated not only to the heat central-Myanmar had to offer but also the cool breeze (and subsequent apocalyptic rainshower). A drop, a couple more and then the sky opens up and you’re very glad you happened to be somewhere with a couple of spots with enough cover to keep you dry. For such a hot and dusty place it sure does know how to put on a show, as though it decided it’s had just about enough with this whole dust thing, how about we shake it up a bit and turn all the paths to mud.

But once you find somewhere to hide and waited that requisite 15 minutes you’re all but assured to find Bagan still out there just waiting for you to climb some slippery steps or sink six inches into fresh mud.

The city-site offers monuments for the young and old, in big and small. The ubiquity of the small votive shrines makes them seem cheap-change. Like a pocket full of coins, you’ll pick the biggest ones – even if a lot of pennies add up to a dollar. If you’ve got time – see the sights. If you’ve not, see what you can and imagine the rest.

Some of the temples have seen a more recent refurbishment, coloured tiles, fencing and padlocks. Others sit almost idle, save for the man who wants to sell you his paintings, which he painted – after he shows you where the stairs are. It doesn’t help that everyone is a painter selling the same paintings, but the same could be said about the tourists (me included) who go snap happy for out of focus pictures of the sunset.

But what’s a tourist town without something to sell to the tourists and what’s a guide if not someone looking to make something out of it. So Look around, see the big ol’ temples. Some are simply awe inspiring, although in many there’s no real way for you to appreciate the grandeur of the spread, the gates locked to preserve cultural legacies of glory-past.

But once you start looking more closely at Bagan you find a couple of things that very well explain why certain decisions have been made and why certain ones have not.

For one you’ll understand why so much of the place was rebuilt after the giant earthquake of 1975 which destroyed most of it, but you’ll also understand why UNESCO didn’t recognise it as a world heritage site, considering all the non-authentic restoration that’s gone on. Even though it looks good to install flood lighting, coloured tiles and flashing coloured aureoles behind the head of Buddha.

Perhaps one of the best, and yes, most predictable places where you’ll really be able to see everything to see is the ‘sunset temple’ or Shwesandaw. Even if it can be a bit of an elbow-to-elbow view it’s still really quite something, just try not to get in the way of everyone’s sunset photos.

Temples such as the Dhammayangyi, once inside, seem remarkably small, its interiors sealed off, leaving only the porches and outer corridors accessible. Others such as the Shwezigon Paya remind one what old Bagan, before time’s passing, might have looked like.

If Old Bagan and its immediate surrounds are the epicentre of the Bagan experience, New Bagan would be the sleepiest spot with still quite striking views of the Ayeyarwaddy’s eastern bank. There’s plenty of ways to see the lay of the land, e-bikes seem to be one of the better choices – so long as you’re very aware of the unfortunate propensity of the things to run out of juice right when you’d rather they didn’t.

Otherwise you could always try the steel-frame single speeds that can be hired for about $1.50, that being said they’re not quite the bikes you find back home but will do the job so long as you give them that extra time in the hot Bagan sun. There’s also the added options of horse-carts or even private taxis but I can’t speak for the experience seeing as they’ll set you back a fair bit more than hiring a bike – powered or otherwise.

So go to Bagan, maybe you’ll even beat the French to it.