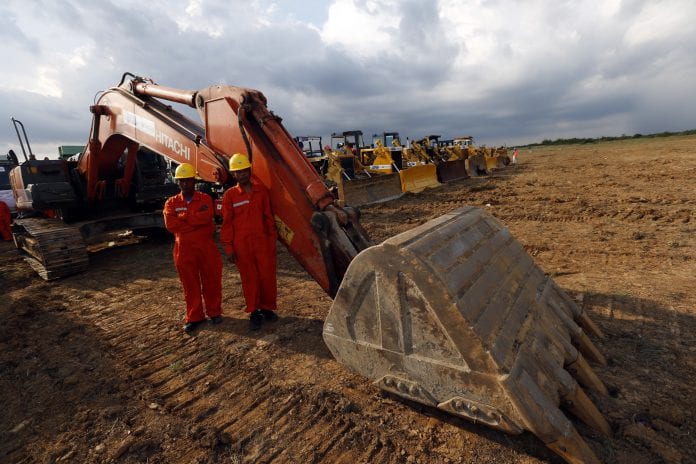 Myanmar has begun implementing the first phase of the Thilawa Special Economic Zone (SEZ) project, the country’s largest economic zone of its kind, on the outskirts of Yangon.

The first phase of the project covers 400 hectares out of the overall 2,400 hectares.

The construction of the joint venture industrial complex started in Yangon with an official ribbon-cutting and ground-breaking ceremony held at the site.

Mitsubishi Corp, Marubeni Corp and Sumitomo Corp will jointly hold a 49 percent stake in the consortium, to be capitalised at $100 million, while the remaining 51 percent will be owned by the Myanmar government and local private companies.

The Myanmar public company is set to sell its shares to the public in early 2014 and the company will start commercial run of the Thilawa SEZ in mid-2015, Myanmar’s first ever SEZ.

Set Aung, chairman of the Thilawa Special Economic Zone management committee, said the event signifies closer and stronger relationship and friendship between Myanmar and Japan, and that the project would open up a new chapter in the history of Myanmar.

Set Aung said the project would attract more foreign investment to Myanmar, and pledged cooperation with the developers and the investing companies for the successful establishment of the SEZ.

“We stand ready for better coordination, facilitation and to provide any necessary assistance to all the stakeholders, especially to the developers as well as investors,” he said.

“It is important that job opportunities can be created by receiving investments from abroad, so that the people of Myanmar can enjoy the fruits of the reforms.”

Isozaki said many Japanese companies remain unsure about investing in Myanmar due to procedural complications, so solving such issues to pave the way for potential investors to come in and create jobs for the locals would be the key to the success.

The site is expected to draw businesses involved in apparel, car manufacturing and other services, upon its completion in 2015.

Thilawa SEZ project, which lies between Thanlyin and Kyauktan townships in Yangon region, has so far been marred by land disputes involving hundreds of farmers, posing a challenge for the implementation of the project.

Of the ¥51.05 billion loan, ¥20 billion is for development of infrastructure in Thilawa SEZ and ¥14.05 billion yen for upgrading power grid project and power stations in Yangon.

With 121 companies already investing in Myanmar, the Japanese investment in the country reached $273.42 million as of July, making it 11th in Myanmar’s foreign investment line-up.