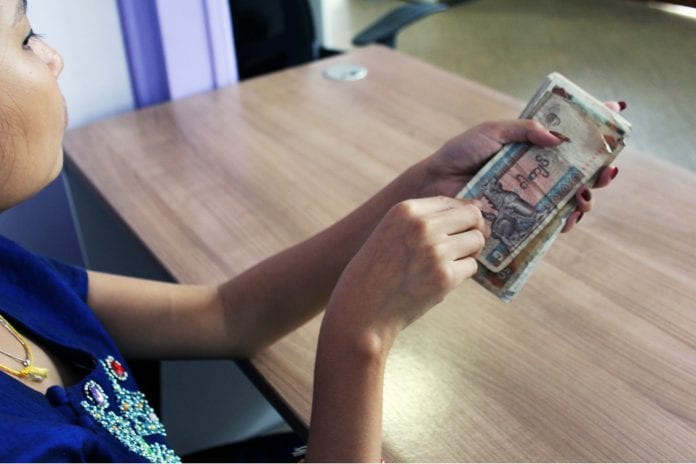 Myanmar’s currency the kyat hit a two-year low against the US dollar last Wednesday, despite the central bank more than doubling its dollar sales to try to stem the slide.

The Central Bank of Myanmar (CBM) set the reference rate for the dollar at 1,048 kyat. The currency, which has been weakening, was 1,005 to the dollar in late October.

Speculation by banks in Myanmar has deepened the impact on the nation’s currency from the dollar’s appreciation on international markets, a senior official at the central bank said. Rising imports have also hurt the kyat.

The float was one of a range of economic reforms enacted by a semi-civilian government that took power in 2011, inheriting an economy hurt by the inept policies of the military junta it replaced.

The weakening currency has prompted the central bank to raise daily dollar sales to $20 million a day from an average of less than $10 million, the official said, on condition of anonymity.

“It’s too bad some big banks are just cashing in on the situation,” the official said. “In consultation with IMF experts, the Central Bank has been doing all it can to help control the falling kyat by supplying dollars to meet the demand at the daily auction.”

Still, Myanmar’s small foreign-exchange reserves meant the bank had limited firepower to deal with the fall, he said.

The official put the reserves at around $4.5 billion. The International Monetary Fund estimated the same figure in March, compared with $3.1 billion a year earlier.

The central bank was planning measures to monitor and control currency speculation, the official said, without giving details.

The situation would stabilise with an increase in foreign direct investment, official development assistance and deposits from newly-licensed foreign banks through the end of the year, he added. The nine foreign banks will each deposit $70 million, for a total of $630 million, in Myanmar in coming weeks.

Banks in Myanmar’s largest city Yangon were selling dollars for as much 1,065 kyat on Wednesday. Imported goods vendors said the weakening currency was impacting business.

“These days, we need to change prices almost every day,” said Kyaw Min, owner of an appliance store. (Reuters)