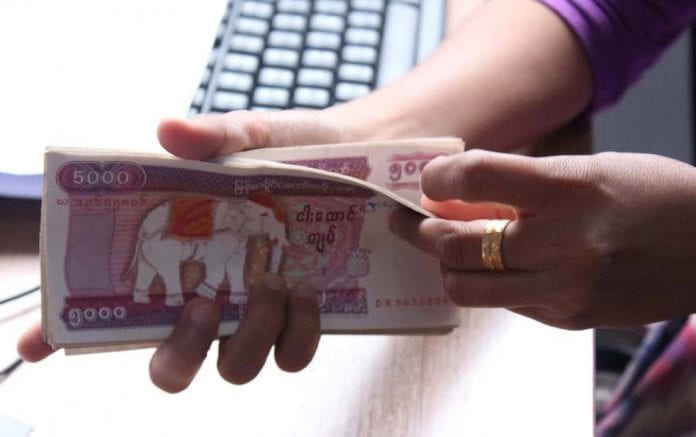 Rising imports and a stronger US dollar pushed Myanmar’s kyat on Tuesday last week to its lowest level since it was first floated two years ago, but the central bank said the currency would stabilise next month and saw no need to intervene.

The Central Bank of Myanmar’s deputy governor, U Set Aung, said the kyat was following the trend of regional currencies and its weakness would have limited impact on the economy.

“The kyat is very strong compared to other currencies,” Set Aung said. “Since the kyat is floating, it will move in accord with the trend in the international market.”

The central bank’s reference rate was K1,004 to the dollar on last Tuesday morning, compared with K1,003 on Monday morning.

The dollar was trading at K995 for selling and K1,008 for buying at local private banks and licensed changers that morning, up from K994 and K1,000 on last Monday morning.

“There are some other factors like increasing imports but the main cause of the fall in kyat at present is the appreciation of US dollar,” U Set Aung said.

Myanmar relies heavily on imports of goods, including essentials like cooking gas, much of it traded at borders using dollars. Weaker exports, including rice, have increased the trade deficit, putting pressure on the kyat.

Myanmar started its “managed float” of the kyat in April 2012 in what was seen as the most dramatic economic reform undertaken by a nominally civilian government that inherited an economy still suffering from the inept policies of a military junta it replaced a year earlier.

“Frankly we, the exporters, do like the fall in the kyat since we earn in dollars,” said Myint Soe, chairman of the Myanmar Garment Industry Association. “The most important thing is the fall in kyat doesn’t spur inflation.”

Inflation was one of the biggest causes of public discontent in Myanmar under military rule. (Reuters)