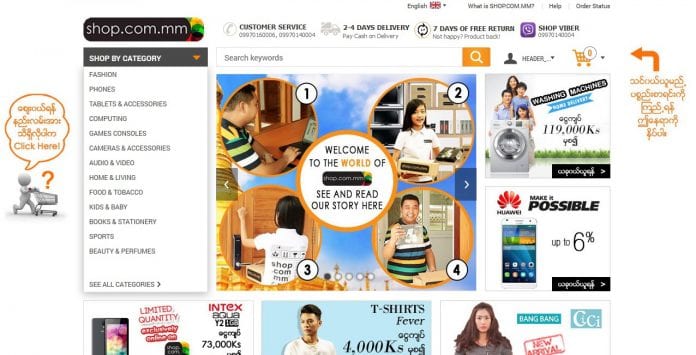 Since its grand inception three years ago, the liberalisation of Myanmar’s economy has enticed an overwhelming international interest. In this resurgence, the once isolated country where the right to internet access was a prerogative of the wealthy now houses an increasingly connected population. The investment in infrastructure by globally competitive telecom companies has reduced the price of connectivity, especially the mobile internet, to an affordable range.

There is now a thriving online communities of Burmese “netizens” – some highly curious and inquisitive, some entrepreneurial, some exhibiting voracious social appetite. Out of this potent mix of net dwellers, the tech-savvy ones went on to establish websites, forums and social groups while the remainder filled the online space as a vocal audience and drove the much needed traction. The accelerating growth of mobile internet continues to expand this niche, moulding it into today’s nascent digital economy.

While the conspicuous opportunities present in traditional business medium may prove to be transient in nature, the potential displayed by the digital market will remain exponential and certain. Online activity is bustling in Myanmar, business establishments both big and small from departmental stores to relatively obscure start-ups are striving to make their online presence. Those with a disposable budget set up websites while those financially austere took a different approach in social networking such as Facebook pages. Despite the difference in approach, they all aim to achieve the same thing: a digital front accommodating customer interaction.

Online market places are also a reality despite the lack of reliable online payment systems or against the fact that only a very minority of the population possess a bank card. In fact, a German start-up firm Rocket Internet has already invested in an E-Commerce venture in Myanmar in the form of shop.com.mm which came online towards the end of 2014. However, a closer hands-on inspection revealed that the website currently has not yet integrated an online payment system. In the event of a purchase, the transaction is approved and then the goods are delivered under the condition that cash payment is made upon delivery.

So the question surfaces: why are businesses so willing to put their time and resources investing in such online ventures when the infrastructure and facilities are deleteriously absent with no viable way to drive any monetary revenue?

In the case of shop.com.mm e-Commerce’s inevitable commercial viability and the prospect of first mover’s advantage incentivise early commitment. The SQUAR group on the other hand pooled their resources on the Android app because they believe in Social-Commerce as an investable idea. SQUAR is an android based social platform debuted exclusively in Myanmar with a user base forecasted to have grown towards 1.5 million figure by the end of 2014.

Social-commerce is an idea that encompasses three symbiotic entities: user, information and platform. It does not directly sell products. It is different from e-Commerce in this regard but forms an integral partnership with it. Consider Facebook for example, it drives revenue by forwarding referrals towards actual e-Commerce outlets. Their adverts are heavily monetised as well. Therefore in simplest term, social-commerce is a commercialisation of information.

To understand this idea in proper context, let’s put a few numbers into perspective. To date, Myanmar collectively has over 600 websites as indexed by myanmarwebdirectory.com (the number is still admittedly incomplete). These numbers include numerous sites such as irrawady.com which are based overseas but primarily serving the Myanmar audience. This sum is further augmented by social media such as Facebook Pages which are by themselves in a couple hundred figures.

This may seem very insignificant at a glance but these numbers are surprisingly compact. For example, Thithtoolwin.com one of the leading internet news sites in Myanmar, ranking in at 14th most visited in the country averages 1.4 million unique monthly visitors according to similarweb.com. They have a corresponding Facebook page with the number of “likes” in the region of 110,000. Their main website receives significant number of referrals from their Facebook page.

Next in the ranks is funny.com.mm, a viral media/internet meme website with over 720,000 unique monthly visits. Now, here’s an interesting observation: they have a Facebook page with cumulative 700,000 “likes” and 75 percent of the traffic to their main website came through Facebook page referrals according to similarweb.com. This is an astounding conversion rate.

While the e-commerce side of the internet economy will take years of development in necessary infrastructure to become viable, Social-Commerce needs no such precondition. Sure, its return on investment has no direct monetary value without an accompanying e-commerce outlet but from the marketing point of view, the incentives are clear: it is an inexpensive and powerful marketing tool. It creates relatively free publicity while the interactivity of the social medium enables unconventional forms of marketing and provides a mean to gauge consumer interest. Both Thinthtoolwin.com and funny.com.mm execute this idea through Facebook.

Now, let’s look into crowd-sourcing, another aspect of Social-Commerce that has only recently gained commercial popularity. Take funny.com.mm for instance, their core content; the viral media, posts and memes are all user created. Any visitor can make a contribution. This theme is heavily borrowed from their global counterpart 9gag.com. Similarly, the users of SQUAR social platform provide the majority of its content. Their vote-based user generated news system is heavily inspired by reddit.com.

In both cases above, the businesses merely provide the platform and are free from the burden of content creation. This is in essence crowd-sourcing: their micro economy is almost entirely user-driven.

The vital essence of social-commerce lies in generating content compelling enough to be shared through the social media. Crowd-sourcing naturally complements this process. Myanmar’s youth hankers for knowledge and are very curious and experimental which makes them perfect participants in this digital scheme.

For instance, in the case of funny.com.mm, it has very cleverly managed to take advantage of the viral nature of internet memes which have found a corresponding lingo in the hands of Myanmar users. These memes are little packets of extremely sharable information and by this intrinsic nature, gets passed around on the social media, effectively collecting and repatriating hits back to its original source. Think of them as digitised form of gossip or rumour, just much more mechanised and systematic.

In a short term of three years, Myanmar has accomplished a monumental feat in its digital endeavours. The momentum is now in its hands and the road ahead shows equal parts in prospects and challenges. E-commerce is coming shortly and based on current observations, Myanmar entrepreneurs may well have all the ingenuity to accommodate its arrival.

Myint Paing is working towards his Business Management degree at Aston Business school in the United Kingdom. Views and opinions expressed in this article are the author’s own and don’t necessarily reflect Myanmar Business Today’s editorial opinion.