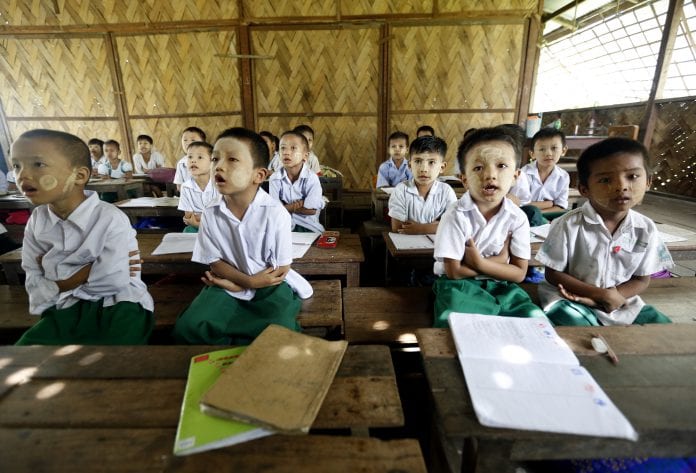 The education system in Myanmar is attracting attention, as both the state and private sector look to invest in upgrading schools and universities. The re-opening of Yangon University to undergraduates last December is seen as a key development. Once considered a leading institution in the region and home to 60,000 students, the university saw its undergraduate teaching suspended in the late 1990s.

Under the military dictatorship, the role of higher-level education diminished. Today in Yangon, universities have low budgets and are spread across a wide area making management difficult and development sluggish.

As Myanmar looks to rebuild its university system, cooperation with international institutions may be one way to secure the necessary funds and other resources. In October, the Japan International Cooperation Agency (JICA) announced it was funding a $13.5-million initiative to improve engineering education in Myanmar, in association with seven Japanese universities. Among the goals of the programme will be to update syllabuses in several subjects (such as civil engineering and electronic engineering), while Japanese professors will travel to Myanmar to conduct guest lectures and lessons.

Interest in the Myanmar education market extends far beyond Asia, to include both Europe and the US. In February 2013, a group of 10 American universities, organised by the International Institute of Education, a New York-based non-profit, travelled to the country to explore partnerships.

According to Jacques Fremont, director of the international higher-education programme at the Open Society Foundation, a non-profit organisation, Myanmar will need to be careful in its efforts to forge links with foreign institutions.

“Will the Burmese say yes to everyone and then lose control of the reform agenda? Or will they be in a position to plan and say, ‘Here is what we need?’ The pressure is huge right now,” he told the New York Times last year.

Foreign investors are already moving into the primary and secondary school segments, looking to serve wealthy local families and the expatriate community. The British International School plans to open a $20,000-per-year institution in August, which will look to satisfy some of the demand fuelled by local wealthy families and expatriates.

The bulk of funding for the Harrow “early years centre” and the Dulwich College school, neither of which will be branded with the UK names, will come from Yoma.

The government appears committed to spending money to upgrade and expand its education system. Under the military junta, education received little funding, on average accounting for 1.3 percent of the national budget. In the latest budget, for fiscal year 2012/13, education accounted for 11 percent of the government’s $7.13 billion spending.

Myanmar has a significant way to go in catching up with international and regional standards. Much of the 70 percent rural population has limited or no access to internet, textbooks or laboratory equipment, and, in many cases, teachers lack the relevant experience to deal with overcrowded classrooms and a weak curriculum.

“Overcrowding leads to a high rate of absenteeism,” Shirley Nang Hom Leik, Program Coordinator at Nexus Myanmar, an English training centre started in 2010, told OBG. She added that classroom practices do not foster creative thought and restrict expression. “The current education system does not encourage creativity by teachers,” she said.

Whilst decades of neglect have left the education sector in tatters, efforts are under way to restore the standard of learning that was in place before military rule. Support is coming from far and wide to bolster an underdeveloped, understaffed and fragmented system. With greater attention directed to the practices and applications of foreign aid and loans on the alleviation of the country’s debt burden, Myanmar will be in a more capable position to develop its education sector and ensure that future generations are trained in fields that will assist the growth of the economy.                             OBG