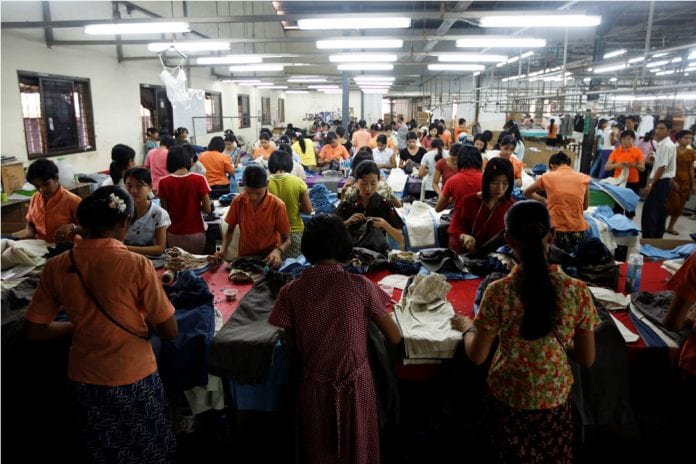 When Aye Cho Khine left her family in a farming town in central Myanmar for work and better pay in the city of Yangon 16 years ago, she felt lost and bewildered.

“I was only 19. Yangon was so big, there were so many people and I only had two friends so I felt quite scared,” said Aye Cho Khine, her hair cropped short and teeth stained reddish-black from chewing betel nut.

But she stuck it out, working her way up to become quality control supervisor in a Korean-owned garment factory.

Women account for an estimated 90 percent of the 180,000 workers in Myanmar’s garment industry, which is expanding again following the easing of international sanctions. Clothing exports are expected to be worth $1.5 billion in 2014.

News of job prospects in the city is spreading, and thousands of young women from villages and towns across Myanmar are pouring into city factories for their first ever taste of financial independence.

Yet for many of these young women, the transition from life in the village – with parents’ strict guidance and financial support – to the city can be fraught with risks and challenges.

The existence of a worker-run association like Thone Pan Hla would have been unheard of during Myanmar’s half a century of military rule. Then, groups needed a connection with the army to survive. In 2011, a new government began implementing a raft of reforms, and was rewarded with the easing of sanctions.

Thone Pan Hla has no political affiliation and focuses on the welfare of women garment workers. Its ‘Sunday Cafe’ and temporary dormitory provide a space for women to make friends, learn skills and share tips to help newly-arrived women ease into their new lives.

Most garment workers earn about $80 to $120 a month and toil 12 hours a day, six days a week, in Hlaing Thar Yar, a factory town outside the former capital Yangon.

The spacious Sunday Cafe – launched in August and open on workers’ one day off – offers snacks and tea, a small library with books and magazines, a place to wash and iron clothes and a flat-screen TV showing Hollywood movies and Korean soap operas.

Upstairs, the temporary dormitory for new migrants has space for 18 women.

Gunthorpe said that her organisation received small grants in 2011 and 2012 that allowed research into the lives of garment workers, leading to the establishment of Thone Pan Hla.

“The need was easy to see because there was no organisation for women garment workers here in Myanmar at the time,” she told the Thomson Reuters Foundation.

Thone Pan Hla currently has around 2,000 members, who pay a one-time membership fee of 300 kyats (about 30 cents). Aye Cho Khine is one of a handful of members who turn up for regular meetings at the Sunday Cafe.

“We’re new so we’re still trying to gain momentum,” Aye Cho Khine said. “Only time will tell how useful we can be but having a space like this to meet and share will at least broaden the horizon for the newcomers.”

“After the sanctions, it went as low as 60,000. Almost half of the factories gradually closed down,” she said.

Some argue the sanctions impoverished ordinary citizens, while others say they forced the junta on a path to democracy.

With sanctions now suspended or lifted, the garment industry is expected to continue growing. So will the need to support the industry’s workers.

“A lot of young women spend most of their days in factories, and they don’t have the opportunity to meet each other, share ideas and make friends,” said Win Yu Khine, 26, who earns $96 a month, sitting with friends at the Sunday Cafe. “This is fun.”

Khine Khine Nwe welcomes the idea of the Sunday Cafe but said it should also be open to female employers like herself.