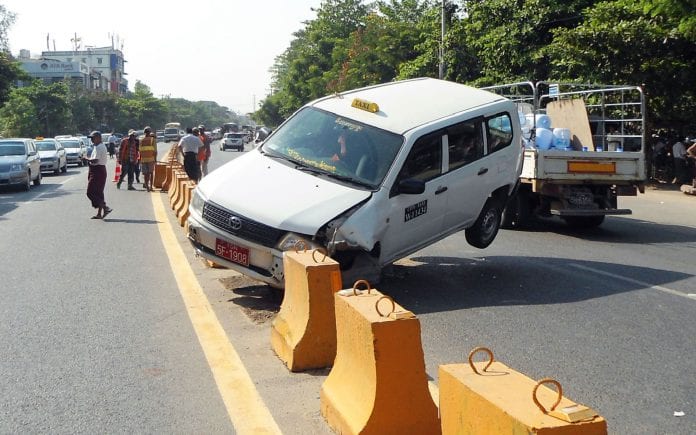 “We are used to not wearing seat belts, that’s why we don’t wear them. There is not so much difference between wearing and not wearing one. It is just extra work, so we don’t put it on. The alarm beeps if the belt is not on, so we put the head of the belt inside,” said one car owner, U Kyaw Min Naing.

This is the prevailing sentiment in Myanmar, where slow traffic, a lack of awareness and a new-found car culture have left drivers and passengers vulnerable. Especially in taxis, buckles are often obscured with seat covers or seatbelts are tucked behind the seat, so passengers lack the option of putting one on.

U Hla Aung, chairman of auto regulatory body Ma Hta Tha, said that awareness programs should be expanded because many people have died in traffic accidents as a result of not wearing seat belt.

The cars imported to Myanmar have safety belts as these cars are produced for other countries. Alarms are also installed in cars to warn people if they do not wear safety belts, but people often circumvent this by inserting aftermarket belt heads, which sell in local shops for K500-1,000.

U Min Han, a Police Officer from No.2 Traffic Police Department, said, “There is law requiring passengers to wear safety belts in Myanmar. Fines can be issued according to the 1964 Motor Vehicle Law, which was updated in 1989 to include a seatbelt provision. But the charges have long been made relevant, only K1,500. So no one cares. There is currently a proposal to change the law now.”

The proposal, which was submitted to parliament on July 3, does not specifically include a provision for seatbelt use, but it is likely one will be included in the associated bylaws. The draft law already includes some safety provisions, such as increased enforcement of traffic laws near school zones.

There were 412 accidents along the highway between Yangon and Naypyitaw in 2014, and in the first six months of 2015, 197 were reported, according to the highway police. There are no current statistics for accidents within the city of Yangon.

One highway express bus owner said that Traffic Police Department should take action effectively as there many people who die in accidents, but until the reckless auto culture is tamed, these changes are probably far away.