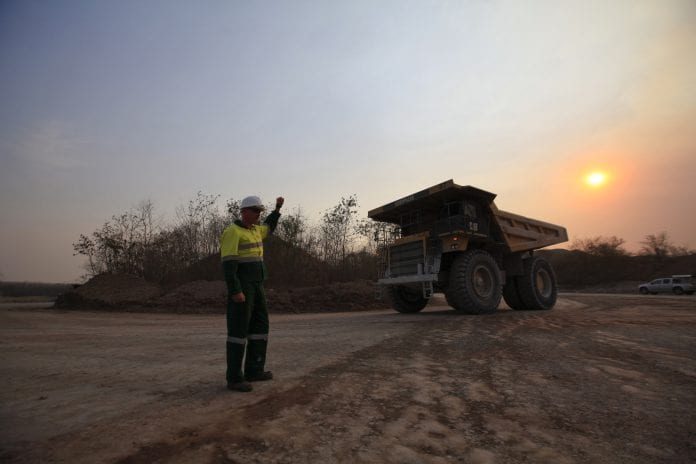 The mining industry in Myanmar could see a rise in investment from 2016 if the government can overcome roadblocks to pass new legislation, delays to which have slowed the pace of development in the sector.

Until now, foreign investment in mining has been minimal. In the 2014-15 fiscal year to end-March, inflows stood at just $6.26 million, with only one company making an investment. By comparison $3.22 billion was invested in the oil and gas industry over the same period. Since 1989, mining has attracted just $2.87 billion in foreign investments, representing 5.3 percent of the overall total of $54.24 billion.

However, the government is keen to entice more foreign investors to support the sector’s development as part of a reform drive under way in the mining of metals, ores, industrial minerals and coal. A new mining law aims to boost investment and would replace existing legislation dating back to 1994. Up to 80 percent foreign ownership of larger projects has been permitted since the 1990s, but an August 2014 reform permitted up to 100% foreign ownership of all private mining businesses regardless of size, except precious stone mines.

The revisions to the existing law have been passed by the attorney-general but need to be put to a vote in parliament to become law. Once parliament approves the draft law, it will be implemented within 90 days, according to the Union of Myanmar Federation of Chambers of Commerce and Industry.

However, efforts to pass the bill were stymied in June, when a crucial amendment, known as provision Article 7(c), was blocked by lawmakers in the lower house. The amended bill would benefit small and medium-sized enterprises by allowing them to enter into joint ventures with foreign firms in contrast to the existing Mining Law, which allows foreign firms to partner only with large local companies.

Another of the main areas of debate over the draft legislation is the issue of resource sharing. This includes both the amount of funds or products that the government can claim in fees as well as the level of control over resources that states, rather than the central government, will retain – an especially important issue given that many of the mineral deposits are located in states like Kachin and Shan that are home to large ethnic minority communities. Other key elements of the draft law include extending the duration of licences granted to mining companies, relaxing taxes imposed on investors and setting out the terms under which foreign firms can operate in the sector.

Domestic gold miners have been affected by the issue of revenue sharing and royalties. According to the Ministry of Mines, more than 40 mining companies were behind on the payments owed under their licensing agreements as of mid-April, with the ministry having launched legal proceedings against an initial five to recover the arrears.

By setting the payments bar so high, there is the risk that large-scale investors will be reluctant to enter the Myanmar market, especially at a time when commodity prices are depressed, warned U Khin Maung Han, chairman of Future Engineering, which operates in the extraction sector as well as construction and services.

“Production-sharing contracts and royalties are extremely high and eat away at the income of mining companies,” he told OBG recently. “Mining is an expensive and risky business. These elements act as a hindrance to foreign investment.”

U Zay Htet, managing director of the Georesources Group, echoed the sentiment, telling OBG that production-sharing contracts were still a barrier to foreign investment. “Although profit sharing is a common practice globally in the mining sector, Myanmar needs to adopt a more transparent approach to entice investors,” he said.

The lack of clarity over environmental requirements could also dent investor confidence. While legislation mandating environmental and social impact assessments for projects such as mines was ratified in 2012 − with accompanying regulations issued last year − there remains uncertainty over the requirements in their current form. The Ministry of Environmental Conservation and Forestry is looking to have standardised procedures for all sectors published shortly, laying out clear guidelines for companies.

One area of marked improvement for the mining sector has been the streamlining of import regulations, allowing for faster movement of equipment and technical supplies into the country, according to U Aung Naing Tun, chairman of oils, lubricants and vehicle services firm Tunn Star Co.

“Importation of goods is a piece of cake compared to a few years back, when it took months to get approval,” he told OBG. “Now that the procedure has improved, it has allowed for better delivery of services, which in turn has raised the level of local competition and foreign interest.”

Though the mining industry still has to deal with poor infrastructure and a developing logistics sector, the situation is expected to improve as investments are made in the transport network. Many analysts also believe the situation will become clearer after the November general elections, when a government with a mandate for reform may move to clear the legislative backlog.

Michael Nesbitt is Editorial Manager for Myanmar at Oxford Business Group (OBG), and is in charge of producing sector specific research in Myanmar. Views and opinions expressed in this article are the author’s own and don’t reflect Myanmar Business Today’s editorial opinion.