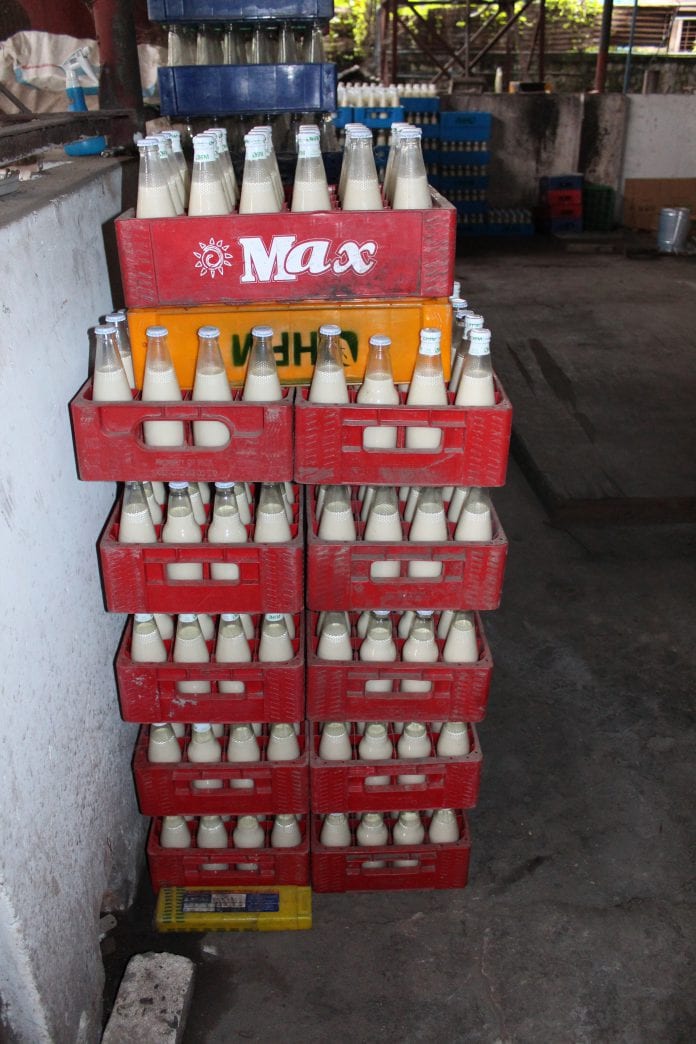 Despite the country’s agricultural industry employing roughly 70 percent of the working population, it is perhaps surprising that dairy is not a strong industry in Myanmar’s economy. That is likely to change as foreign investment comes into the country and firms from strong dairy countries such as New Zealand and Israel contribute to the growing industry. The government also recently announced plans to introduce natural milk to 45,000 primary school children in Myanmar, aimed at promoting growth in children and alleviating malnutrition.

Particularly outside the cities in Myanmar, it is an agrarian society. Cows, rather than machinery, are used to plough the fields and many other measures hark back to how life was lived 100 years ago. This means that beef is not particularly abundant and farmers prefer using cows for work rather than dairy.

One business group, operating out of a small site in Yangon’s Hlaing Tharyar township, is aiming to tap the potential in a product that is much more pertinent to Myanmar’s situation than dairy milk – soybean.

Soybean is found easily in Myanmar, most prominently in the Ayeyarwady region and Shan state and the group, led by Rick Chase, manager of Healthy Food Myanmar, aims to use the bean to deliver a number of products within Myanmar.

Healthy Food Myanmar develops soy-based snacks and a brand of soymilk which is not entirely different in taste to that of “natural” (usually cow’s) milk but is often seen to have more nutritional value and is growing in popularity around the world.

“Myanmar is a dairy-dependent country, but could become independent if it develops its soy industry,” said Chase, who works alongside local group Myanmar Chemical Engineers Group (MCEG-1) to develop the country’s soy industry.

Theories abound regarding what nutritional value soy milk offers to consumers, but Chase argues that there is double the amount of protein in soy milk when compared to the more traditional form, something that is crucial in a country where malnourishment is a menace.

Chase argues that in the areas where soy milk is distributed in Myanmar – currently in 12 location in Hlaing Tharyar township, while there are plans to expand further – “we can provide [their protein intake] in a day, what they would normally have in a week.”

But soy milk is not without its detractors. Some accusations levied at the soy bean include it being unsafe for children, interfering with thyroid, and that it can even cause cancer. The most common criticism is that it has high levels of oestrogen, or estrogen, a general term for female steroid sex hormones that are secreted by the ovary and responsible for typical female sexual characteristics, and some male drinkers of the product develop breasts – commonly referred to as “manboobs”.

Chase, and other observers of the product, dismiss these theories, seeing these as propaganda ploys from the whey protein industry that seems keen to dismiss a potential rival.

In 2009, one of the most popular health and lifestyle magazines, Men’s Health, published an article describing how the body of an ex-USA army officer was “feminising”. The officer in question reportedly saw his beard growth slow, a loss of hair and his sexual desire disappear. “My penis – I won’t say it atrophied, but it was so flaccid that it looked very small in comparison with the way it used to be. Even my emotions changed,” the army officer was quoted as saying. In a magazine that is renowned for highlighting the masculine lifestyle, this appears to be a deliberate ruse to play up the “feminine” elements of the soybean in order to detract it. That being said, the “feminising” argument is one that has been heard before.

“Let me preface by saying that I am a dairy and meat fan and also an avid Men’s Health reader,” said Chase in response to the article.

“However, if you read their magazine, you will notice that just about every other page contains a whey protein advert and not a single soy [one].”

He added that any food, even healthy food, can affect some of the population adversely and that too much of any product – and in the article, the officer drank about three litres per day – could harm anyone. “Especially dairy. For instance, dairy comes from a cow’s stomach whereas soy comes from the earth.”

“The dairy and meat industry are losing ground to soy and so their tactic is to disseminate research funded by them that supports what they want to find out,” Chase said.

Arriving in the country four years ago, Chase recognised the potential for soy products in Myanmar, particularly due to the abundance of soybean as well as soy milk’s cheaper costs compared to cow’s milk. He was introduced to U Sein Thaung Oo, director of MCEG-1 and vice chairman of Myanmar Food Processors and Exporters Association (MFPEA). He is also a leader in food processing, alternative energy and agriculture as well as consultant to the Myanmar government on agricultural and nutrition policies and laws.

An engineer himself, Sein Thaung Oo also saw the potential offered by soybeans and began the process of setting up machinery to make soy-based products, which included a technological transfer from a Canadian-made machine.

A successful transfer of machinery has only been successful three times before Myanmar – in Thailand, India and Russia – and within four months, MCEG-1 and their engineers had successfully constructed eight of the machines, named Vitagoats which came through Canadian company Malnutrition Matter. Each machine, Chase says, can provide a livelihood for up to six people.
Since the machine were built, the local engineers, who Chase says are the leaders of Soy food in Myanmar, adapted the existing machinery in order to make them more efficient as well as add value.

The new machinery can now produce about 3,000 bottles of soy milk per day and a double sterilisation machine that the engineers designed means that milk can now last up to one year after it has been produced.

World Vision, an international humanitarian group, has signed up as a major customer and while the company currently only distributes around Yangon, there are plans to expand and potentially export internationally to China, Singapore, and countries in North America and Europe, among others.

Chase believes that if Myanmar can focus on developing its soy industry, it could see huge economic and health benefits.

“Soy is the future of food and there is enough soy currently grown on earth to supply half the protein needs of every human being.”