New CIF Values for Cars to be Set 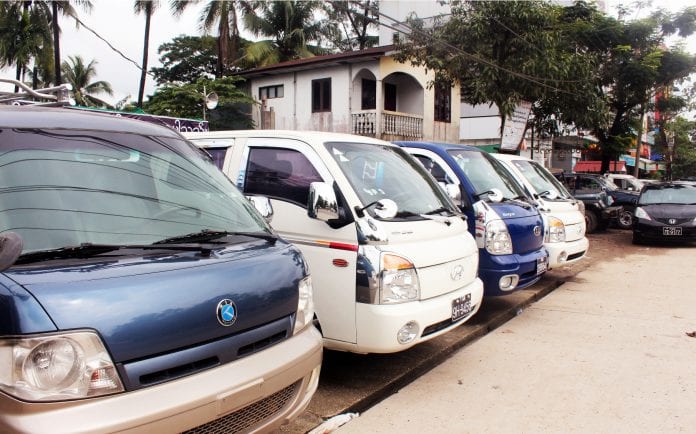 New Cost, Insurance and Freight (CIF) values for imported automobiles will be fully released soon as the values are being arranged to be in line with the prices of 2014 and 2015 model cars, according to the Ministry of Commerce.

CIF values are used to calculate the tax for vehicle imports and can impact significantly on market prices.

Although Minister for Commerce U Win Myint had previously said that the new CIF values would be completely released at the end of October, the reevaluation process is met with delays after the announcement that only cars produced in 2008 and above will be allowed for import.

“It’s still not possible to set a CIF that applies to all models. By setting the CIF value we are trying to post a medium price between the highest and the lowest. The price of a car can be higher or lower than the standard price,” said U Thet Htwe, director of the supervisory committee on vehicle imports under the Ministry of Commerce.

The process is being carried out to ensure no big price difference appears between different models of brand new cars. The process is more than half finished, he said.

“The new CIF value will not change the market prices significantly. The effect won’t be much different from last year,” U Thet Htwe said.

New cars dealerships are flooding into Myanmar. The government halted permits to import 2008 model or above sport cars in March but later re-allowed import of 27 types of sport cars. The new CIF values will also cover those 27 sport car models.

Car imports with free permits, which allow applicants to import “eligible” cars without any other document, have been issued since November 2011.

According to the supervisory committee, during the current fiscal year, 152 registered car sale centers have so far secured permits for 67,854 cars; of which 54,886 have arrived and 41,378 already sold to the customers.

Seven brand new car sale centres have acquired permits to import 1,882 cars in this fiscal year, of which 1,276 have arrived and 728 have been sold.