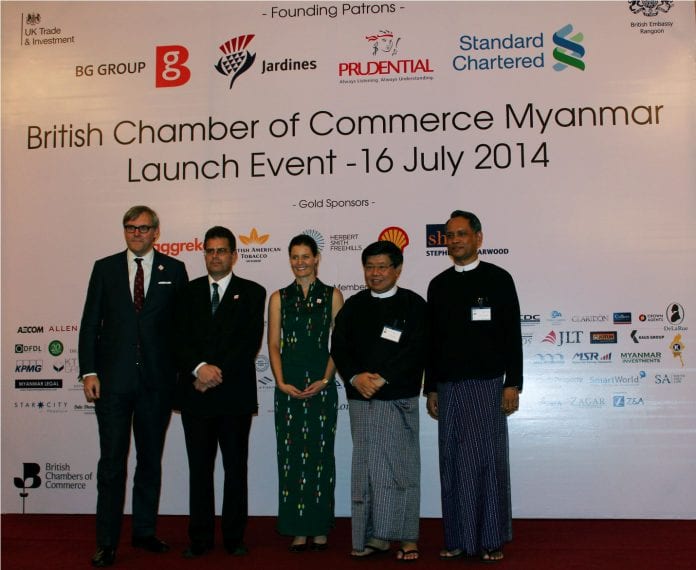 Dozens of leaders of Yangon’s growing business community gathered at the Strand Hotel in Yangon to celebrate the launch of the British Chamber of Commerce in Myanmar on the evening of July 16.

The Chamber is the first chamber of commerce to open and register locally in Myanmar following the rollback of EU sanctions amid the country’s political and economic reforms.

According to the British Embassy Rangoon website, the establishment of the Chamber is “aligned with the British Government’s position to support responsible, sustainable and transparent investment in Burma.”

At the time of the launch, the Chamber boasted 86 members companies in total, making it the largest chamber of commerce currently active in Myanmar.

The launch event kicked off with remarks from Antony Picon, managing director of Colliers International Myanmar, who also serves as President of the Chamber.

“It is an exceptional time for our Chamber to set up in Myanmar as the country begins its journey towards sustained economic and social development.

“We aim to ensure that the Chamber is a dynamic, inclusive business group that reflects the membership’s needs and adds value for companies operating in Myanmar,” said Picon.

In addition to British companies, the Chamber’s membership is open to Myanmar companies as well as foreign companies with business interests in the UK or Myanmar.

Picon extended this invitation, saying, “We encourage Myanmar companies to get involved in the Chamber to make connections with international businesses and to help keep informed of business trends worldwide.”

British Ambassador to Myanmar Andrew Patrick said, “I believe British business can play a central role in supporting economic growth in this country, creating jobs and raising skill levels. [The Chamber] has the full support of the British Embassy.”

Secretary of the Myanmar Investment Commission U Aung Naing Oo said the Chamber will strengthen ties between companies, government and people.

He also highlighted the importance of the Chamber in the eyes of the Myanmar government by remarking that his office had recently been moved from Nay Pyi Taw to Yangon to be closer to the rapidly growing business community.

According to Lisa Weedon, director of UK Trade and Investments Burma, the idea of establishing a British chamber of commerce in Myanmar sprouted from a much smaller, informal group of business leaders who met regularly in Yangon to discuss business opportunities and practices in the emerging Asian market.

When the idea of setting up an official chamber of commerce arose, the group secured seed funding from the British government through its Overseas Business Networks Initiative, which seeks to strengthen the UK’s business to business networks in 41 countries. Myanmar was added to the program when then-Minister for Trade and Investment Lord Stephen Green visited the country last year.

The establishment of the Chamber comes as business between the UK and Myanmar registered a 244 percent increase from 2012 levels. The value of British exports to Myanmar skyrocketed from £12.8m to £44m in 2013.

According to John Longworth, director general of the British Chambers of Commerce, the Chamber brings the UK one step closer to achieving the goal set by Prime Minister David Cameron of increasing British exports to £1 trillion by 2020.

In addition to providing a market for British exports, the Chamber will also strive to integrate Myanmar companies into the opportunity that has generated so much international fervour in the country.

Stephanie Ashmore, executive director of the Chamber, said that she hopes to organise bi-monthly events for Chamber members, including training sessions for Myanmar business professionals.

However, Ashmore also noted that Myanmar companies have been slower to join the Chamber than international ones, possibly due to a combination of feeling excluded by the name of the Chamber and simply not seeing the benefits of joining.

Nonetheless, Ashmore remains committed to boosting membership among British, Myanmar and international companies and ensuring that the Chamber’s activities allow all parties to benefit from the business opportunity in Myanmar.

In addition to seed funding from the British government, the Chamber is supported by four “Founding Patrons” – BG Group, Jardines, Prudential and Standard Chartered Bank – all prominent international British corporations.