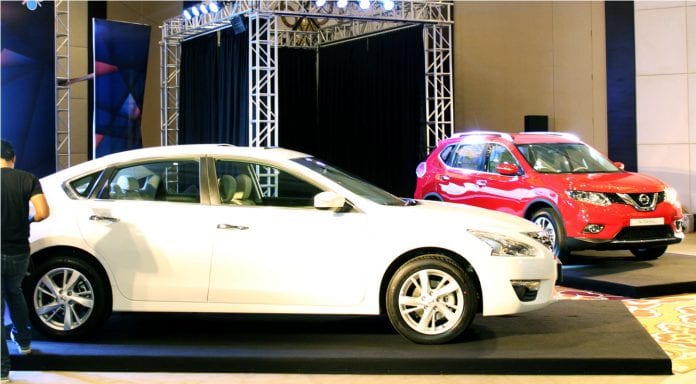 “The Nissan Altima and X-Trail have been a success in every market around the world, and we are aiming for the same here in Myanmar,” Kenji Naito, senior vice president, Nissan Asia Pacific, said at the launching event.

Since its launch in the US in June 2012, sales of Altima and Teana, as it’s known in other markets, have crossed 600,000 units in 37 countries. X-Trail has also been one of Nissan’s globally successful models. It won the 2014 Car of the year in Indonesia and recorded top SUV sales in Japan during fiscal year 2013, totalling 42,500 units. X-Trail is also the second bestselling model in the US, and is ultimately expected to be offered in 190 countries worldwide.

The Altima is priced at $59,000, while the X-Trail begins at $60,500 in Myanmar. Both vehicles come with an early bird promotion for purchases made before December 31. Customers are entitled to “two-year free maintenance inclusive of labour and spare parts” along with a $300 petrol subsidy, Nissan said in a statement.

Kenji said the Myanmar government is on the “right track” with the introduction of strategic initiatives and strategies to nurture the automotive industry as the frontier economy opens up.

“We share the aspirations of the government in realising Myanmar’s role as the new destination for investment opportunities specifically in the automotive sector.

“Along with strong direction and policies with a fast growing economy, we believe Myanmar is geared for high growth and will play a key role in ASEAN region development,” he said.

Nissan distributes its cars in the Indochina region through Malaysia-based Tan Chong Group and the firms have been partners since the 1950s.

“Along with Tan Chong, we have been aggressively expanding our manufacturing footprints in this region by way of heavy investments. Myanmar is of course part of that expansion plan,” Kenji said.

He said market expansion is at the heart of the world’s sixth largest automaker’s global roadmap for growth, with bigger footprints in Asia as priority.

“ASEAN has long been an important part of Nissan’s global sales growth. There are absolutely no changes to our strategy here. We have a clear, ambitious plan in ASEAN, aiming to sell over 500,000 units and gaining more than 15 percent market share in the future.”

Cheah Sam Kip, chairman of ETCM (Myanmar) Co Ltd, which is Nissan’s Myanmar distributor and backed by Tan Chong, said the introduction of both these models is “timely” as the Myanmar economy is expanding fast.

“I remember the time when I first came to Myanmar in 2002, there were only a limited number of vehicles on the roads in Yangon and there was no traffic jam. Today, the story is different, with traffic jams a common occurrence. This, by itself, is an indication of the vibrancy of the Myanmar economy especially the automotive sector.”

Kip said Tan Chong Group is eyeing to strengthen its presence in the Myanmar automotive industry through its 3S center in Kamayut township, which offers sales and after-sales service with genuine spare parts.

“We are confident that Nissan sales volume in Myanmar will align with the local industry growth, thanks to the introduction of both the All-New Nissan Altima and X-Trail,” he said.

Last year, Nissan said it is partnering with Tan Chong to build the largest automobile assembly plant in Myanmar. The new plant will open in the Bago region in 2015 to produce Nissan Sunny cars. With 300 workers, it will have a capacity to assemble more than 10,000 vehicles a year.