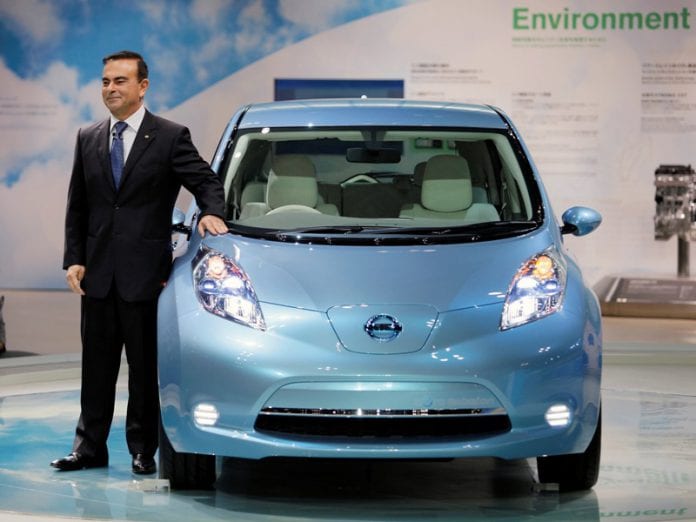 Carlos Ghosn, the CEO of Renault SA and Nissan Motor Co, said he was unfazed by delays in his electric vehicle sales targets, predicting rivals would face even greater obstacles in their plans to launch fuel cell car sales over the next few years.
Ghosn last week reiterated that Renault and Nissan would push back by two to three years an initial target to sell a combined 1.5 million electric vehicles by end-March 2017.
While Nissan has moved back its EV target, it also said it would lift US production of its all-electric Leaf, the world’s best-selling electric vehicle, after a price cut boosted sales in that market.
“Do I regret my investment on electric cars? No, obviously,” Ghosn told reporters at the Tokyo Motor Show.
Nissan and Renault combined have so far sold only 120,000 electric vehicles since they first brought one to market three years ago.
But the difficulties with recharging infrastructure, which Ghosn blamed as the key reason hobbling electric vehicles’ popularity rather than any technical problems, foretell an even more daunting challenge for fuel cell vehicles, he said.
Both Toyota Motor Corp and Honda Motor Co plan to start selling fuel cell vehicles around 2015.
“Frankly, I don’t know how they are going to do it, because knowing all the problems we have, to have a charging system with electricity, where is the hydrogen infrastructure?” Ghosn said.
“That’s why we have postponed, in a certain way, some of our ambitions in terms of fuel cells.”
Fuel-cell cars chemically convert hydrogen to electricity to power the vehicle, emitting only water vapour as a waste product. Unlike electric vehicles which can be recharged from home as well as charging stations, fuel-cell cars must stop at refilling stations.
Battery-powered electric cars, however, also have a relatively limited range – the Leaf goes at most 230 km (143 miles) on a single charge – and can take hours to recharge. Fuel-cell cars can refuel within minutes and travel more than double that distance, roughly on par with conventional gasoline-powered cars.
But the high cost of hydrogen stations, at $6 million apiece, poses a major hurdle for fuel cell vehicles.
Toyota unveiled a fuel cell concept sedan at the Tokyo Motor Show last week with two hydrogen tanks and a driving range of 500 km.
The car will sell for 5 million to 10 million yen ($50,000-100,000) when it goes on sale in 2015, said Satoshi Ogiso, a Toyota managing officer who was involved in developing the Prius hybrid.
Nissan is not rejecting fuel cell technology – it plans to bring one to market in 2017. But that lags Toyota and Honda by two years.
Major carmakers around the world are spending billions of dollars to develop fuel-cell technology, and to limit the burden some have formed alliances.
Toyota and BMW AG plan on rolling out a jointly developed fuel cell vehicle system by 2020. Honda and General Motors Co are also jointly developing a hydrogen fuel-cell vehicle systems over the next seven years, while Nissan, Daimler and Ford plan to develop and launch affordable fuel-cell vehicles within five years.
Reuters